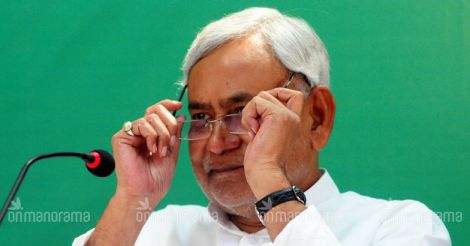 Patna: Bihar chief minister Nitish Kumar on Friday ruled out any change in his party's stand on supporting the NDA's presidential pick Ram Nath Kovind and attacked the Congress for propping up 'Bihar ki beti' Meira Kumar as the opposition's candidate for a lost cause.

He said the JD(U) took the decision after considering all aspects and the election for the top office should not be a matter of confrontation, as he asserted that instead of devising a strategy for victory in 2019 Lok Sabha polls the opposition has formulated a strategy for "defeat".

Kumar said his party had always taken independent decisions, including backing the candidature of Pranab Mukherjee, who was then the UPA's nominee, for the post while being in the NDA.

"There is no doubt about the result. We have a lot of respect for 'Bihar ki beti'. But she will lose," he told reporters here.

"You (Congress) had opportunities twice. But, why didn't you choose the 'Bihar ki beti' when she had a chance to win? I believe they should have a re-think," Kumar said, adding, "But you (Congress) have begun (preparations for the 2019 general election) with a losing strategy."

The Bihar chief minister said, "There should be a strategy for the 2019 general election. This is not for victory in 2019."

He said that Kovind's name was announced first by the ruling party and the JD(U) did not have any objection to his name. "That is why we supported him," Kumar said.

The JD(U) had on Friday rejected its ally and RJD chief Lalu Prasad's request to reconsider its support to the NDA's presidential pick, saying its stand was based on merit and it would stick to it.

"Everyone is independent to put forth views. As far as the 'mahagathbandhan' is concerned, it is not an issue of the alliance. It is a decision to be taken by each party separately," Kumar said.

He said he had met Congress president Sonia Gandhi and CPI(M) leader Sitaram Yechury and that he had conveyed to them that it was a matter of pride that Bihar governor Kovind will become the next president.

Kovind had worked for Bihar without any bias, Kumar said.

"It's an election for the post of the president. It should not become an issue of confrontation," he asserted.