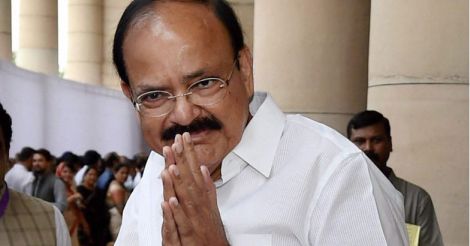 Although 785 MPs were eligible to vote in Saturday's election, 14 MPs could not exercise their franchise.

The strength of the electoral college comprising both elected and nominated MPs of the Rajya Sabha (RS) and the Lok Sabha (LS) is 790. There are two vacancies each in the LS and the RS.

Born to a humble agricultural family in Andhra...

One BJP Lok Sabha MP is barred from voting following a judicial pronouncement.

A "humbled" Naidu expressed gratitude towards prime minister Narendra Modi and the MPs who voted for him, and promised to uphold the Constitution and the dignity of the upper house of Parliament.

Thanking the prime minister and all party leaders for their support, Naidu said, "I will seek to utilise the vice-presidential institution to strengthen the hands of the president and uphold the dignity of the upper house." 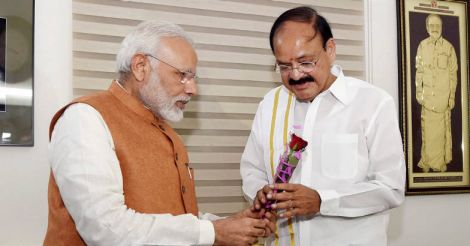 "It's an honour for me to become vice-president from a family of an ordinary farmer. This speaks for the beauty and strength of our democracy," he added.

"Coming from an agricultural background, I never imagined I would be here. Agriculture has no proper voice in Indian polity," India's vice president-elect told PTI. Venkaiah Naidu being greeted by his wife Usha and daughter Deepa Venkat after being elected as the vice-president of India in New Delhi on Saturday. PTI

Naidu will be the 13th person to hold the second highest constitutional post. By virtue of being the vice- president, Naidu will also preside over the Rajya Sabha as the Chairman.

He will take oath on August 11, a day after the term of the present incumbent Hamid Ansari ends.

"I am confident @MVenkaiahNaidu will serve the nation as a diligent & dedicated Vice President, committed to the goal of nation building," Modi tweeted.

Naidu will be visiting Tirupati on Sunday to offer prayers. 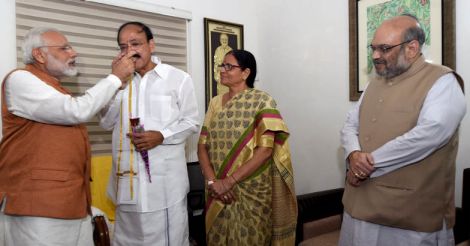 With Saturday's election, those holding the three top positions in the country --the president, the vice-president and the prime minister – come from the BJP.

Naidu will be the second BJP leader to become vice-president after Bhairon Singh Shekhawat (2002-2007).

A two-term BJP president, Naidu was also elected to the Rajya Sabha three times from Karnataka. He represented Rajasthan in the Upper House of Parliament before he was nominated to the vice-president's post by the NDA.

Once an L K Advani protege, Naidu vigorously backed Modi for the prime minister's post before the 2014 elections.

He was minister for information and broadcasting and housing and urban affairs in the Modi government and earlier held the parliamentary affairs portfolio.