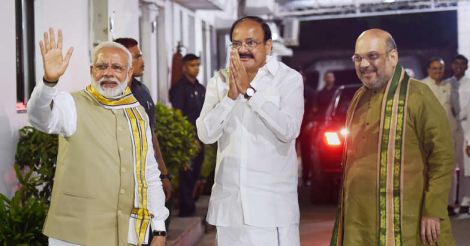 New Delhi: NDA's vice-presidential candidate, M. Venkaiah Naidu, Saturday said he was "a non-party man", and that majority of the parties supported his candidature.

"I am confident that they all will vote Saturday," Naidu told the media after leaving for the Parliament to participate in the voting process.

Naidu said he was not contesting against anybody; individual or party. "I am contesting for the post of vice-president."

The 68-year-old said he was known to all members of the Parliament and this was the reason why he did not campaign.

The former union minister, was on July 17, fielded against opposition candidate Gopalkrishna Gandhi, for the post of vice-president.

The voting to choose the vice-president of India began in the Parliament at 10 a.m.