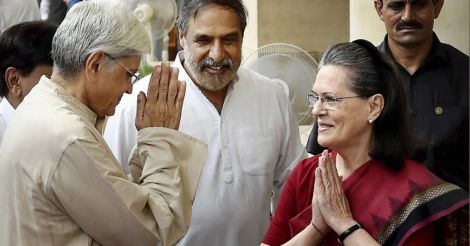 New Delhi: Even though its nominee suffered a massive defeat in the vice-presidential poll, the opposition Saturday said Gopalkrishna Gandhi had got more votes than Meira Kumar what garnered in the presidential election.

Congress general secretary Ghulam Nabi Azad pointed out that opposition candidate Kumar had got 225 votes in the July 17 presidential election, whereas Gandhi bagged 244 votes in the vice-presidential poll.

"The number of votes has gone up by 19. It is a good thing that the votes have increased instead of decreasing," he said.

Azad also claimed that the ruling NDA had 'approached all the opposition parties,' seeking support for its candidate M. Venkaiah Naidu.

"Despite all the efforts of the government, our number (of votes) has increased over the last around 20 days, after the presidential election," he said, while thanking the opposition parties and their MPs for supporting Gandhi.

CPM general secretary Sitaram Yechury too expressed satisfaction over the number of votes going up since the presidential election.

He also dubbed the vice-presidential election as a political fight between two trends.

"We got more votes compared to the presidential election. Those who want to strengthen the Constitution, had come together to field Gopalkrishna Gandhi. We are grateful to him (Gandhi) for agreeing to be the candidate of a united opposition," said Yechury.

Both Azad and Yechury said the opposition parties would look into the voting pattern of their respective MPs.

CPI national secretary D. Raja congratulated Naidu on being elected as the next vice-president of the country.

"We hope he will uphold the Constitution and constitutional morality and be accommodative to all the parties as the Rajya Sabha chairman," he said.

Naidu bagged 516 of the total of 771 votes cast in the vice-presidential poll, while Gandhi could only manage 244. Of the 771 votes polled, 11 were found to be invalid.

Although, there are 785 MPs in both the Houses of Parliament, 14 members could not exercise their franchise.