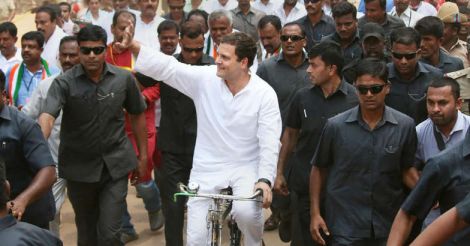 Congress president Rahul Gandhi rides a bicycle to protest against the fuel price hike at Malur in Kolar district on Monday. PTI

In what could be a morale booster for the Congress during the peak of the high-decibel campaigning for the Karnataka Assembly polls, a pre-poll survey, conducted by the Lokniti-CSDS-ABP News, has predicted an edge for the incumbent party ahead of rival BJP and JD(S).

The survey revealed that the Congress was inching ahead and increasing the gap with its principal rival, the BJP.

The data indicates that the Congress is likely to win 92-102 seats in the 224 seat Assembly. However, it will be still short of the half way mark by a few seats. The BJP is set to win 79-89 seats while the JD(S) will be a distant third with 34-42 seats. The ruling party seems to have an edge in all regions of the state-Hyderabad-Karnataka and Coastal Karnataka and Mumbai-Karnataka except the Old Mysuru region in south Karnataka where it is trailing behind the JD(S), led by former prime minister H D Deve Gowda.

However, the survey says that the Congress government's move to play the Lingayat card by recommending religious status for the dominant community has not succeeded well. The survey reveals that the Lingayat voters still remain loyal to the BJP.

The results of the survey must be a solace for the Congress, especially since an earlier survey conducted by the Jain University-Lokniti-CSDS had indicated that the electoral contest was extremely close with no party likely to secure a majority on its own. The latest survey was conducted in the last week of April and the first few days of May, that is apparently after prime minister Narendra Modi began his hectic campaigning in the state.

Though the earlier Jain University-Lokniti-CSDS poll had found that the BJP was reported to be in the lead in Coastal Karnataka and Mumbai Karnataka, the current poll shows that the Congress has wrested the initiative in both regions.

When it comes to the most preferred choice for chief minister, the Congress again seems to have an edge with the most preferred choice being incumbent, Siddaramaia. The socialist-turned-Congress leader has a six percentage point lead over the BJP's CM nominee, B.S. Yeddyurappa. The JD(S) nominee, H.D. Kumaraswamy is third with five percentage points.