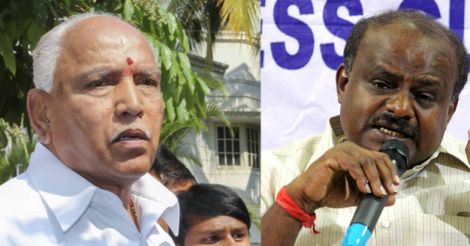 BJP's chief ministerial candidate B S Yeddyurappa and JD(S) leader Kumaraswamy rushed to Raj Bhavan to meet the governor after Karnataka threw up a hung verdict.

• BJP gains lead in over 100 seats, but falls short of majority 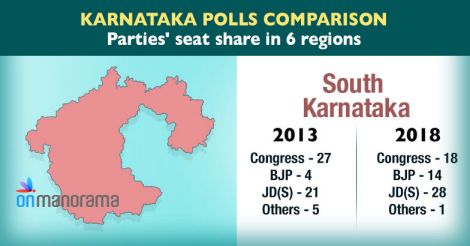 • Both Congress-JD(S) and BJP stake claim to form government 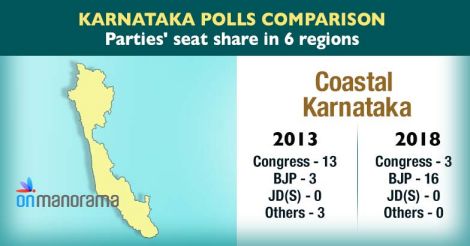 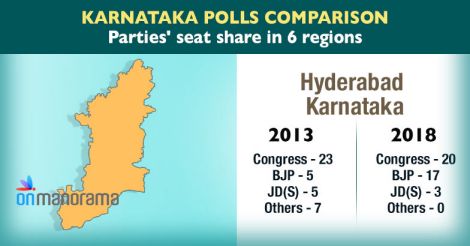 Bengaluru: The Karnataka Assembly election results threw up a surprise outcome on Tuesday as a simple majority tantalisingly eluded the BJP and the Congress quickly proclaimed support to third-placed JD(S) to keep the saffron party out of power . 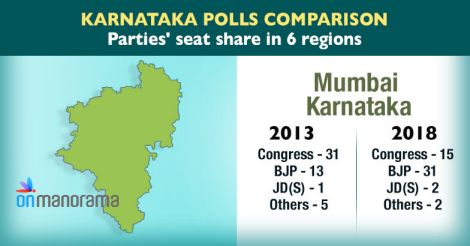 All eyes are now on governor Vajubhai Vala who will have to decide whether to call the BJP, the single-largest winner of seats, to try to form the government or go with the JD(S)-Congress combine, which has a clear majority in the 224-member assembly. 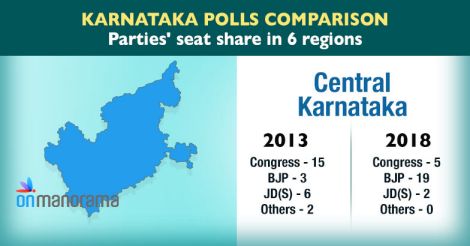 All roads lead to Raj Bhavan

Both sides rushed to meet Vala, their vehicles slowly cutting through the throngs of party workers and supporters assembled outside the Raj Bhavan gates, and staked claim to power. 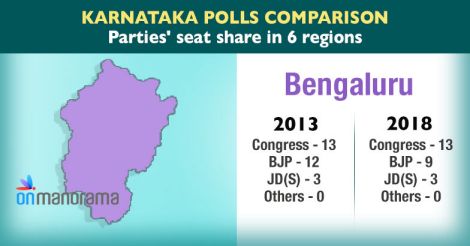 In a roller-coaster ride for the BJP, it initially appeared that the party was set to return to power after a five-year hiatus with a resounding majority. But as all the trends became known, it appeared the party will fall a few seats short of the 112 needed to form the government. 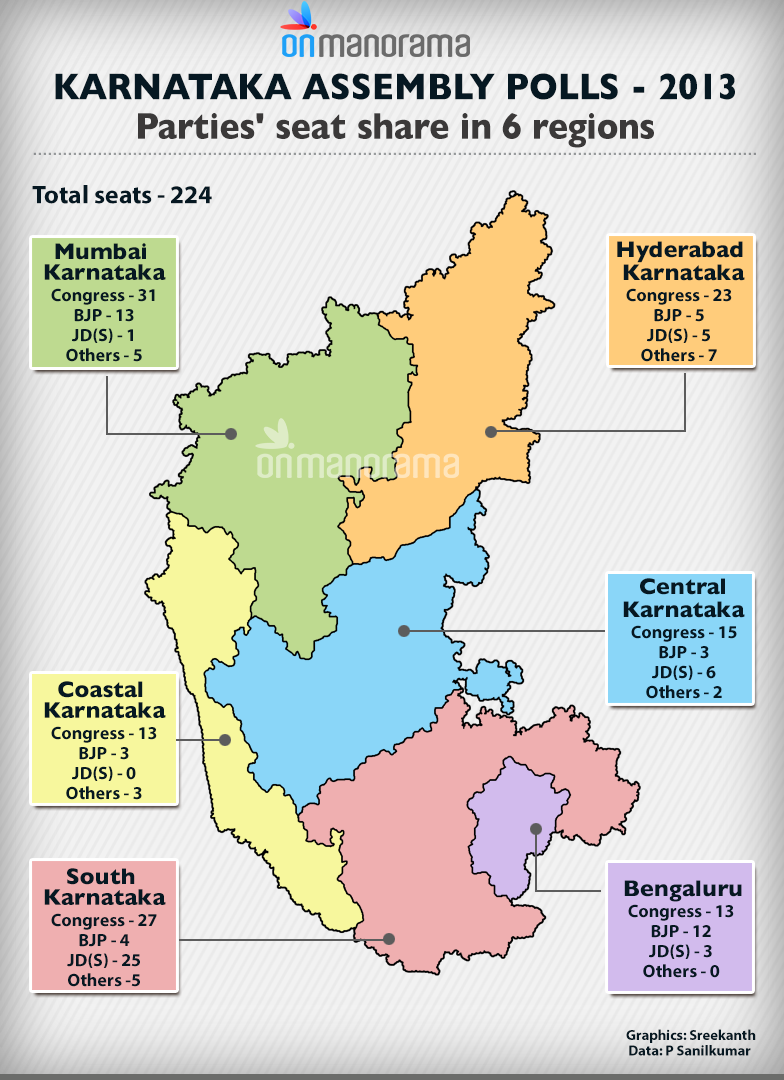 "We had to be ready for any eventuality. So when there was a window, we chipped in," Congress leader Ghulam Nabi Azad told reporters. "In the morning, it looked like the BJP will have enough to form the government, and on the basis of that BJP started celebrating also. Meanwhile, we fared well. JD(S) did not fare that well. And later, when the JD(S) and the Congress numbers swelled up, that was the time we felt we can make it," he said.

Unwind in our 'safe resorts:' Kerala Tourism to MLAs

Azad's comments summed up the breathtaking day-long developments in an election seen as a bellwether for the 2019 general elections at a time when the saffron wave is sweeping the country. Karnataka was the only major non-BJP ruled state, and the party offices had reverberated with jubilation in the morning when initial trends put it ahead.

Several BJP and Congress leaders rushed to Bengaluru from the national capital.

The swift political manoeuvring by Congress in reaching out to JD(S) headed showed that it had learnt its lesson after the debacle in Manipur and Goa where it failed to form the government despite being the single-largest party because of BJP's clever moves.

"We have all together discussed and decided this.... This is the opinion of the All India Congress party. Congress will support JD(S) because there is a hung assembly situation here as no party has been given clear majority by the people," outgoing chief minister Siddaramaiah told reporters.

We accept the mandate of the people. We bow our heads to the verdict. We don’t have numbers to form govt. The Congress has offered to support JD(S) to form govt: G. Parameshwara, Congress. #KarnatakaElections2018 pic.twitter.com/C4Hn3rtYGl

Siddaramaiah, who handed over his resignation to Vala, said:"In a democracy we will have to accept people's verdict, we have accepted it. Our decision is to support JD(S). It is our unanimous decision."

However, BJP's chief ministerial candidate B S Yeddyurappa accused Congress of trying to win power unfairly. He said he would stake claim to form the government.

A sombre-looking Yeddyurappa said the people of Karnataka had rejected the Siddaramaiah government 'lock, stock and barrel'.

Despite being rejected Congress is trying to grab power: BS Yeddyurappa#KarnatakaElections2018 pic.twitter.com/38LclYuXz6

"The Congress is trying to subvert the popular mandate and come back to power through the back door. People of Karnataka will never accept this," he said.

After a high voter turnout, the Election Commission announced that the Congress had won 37.9 per cent of votes as against BJP's 36.2 per cent. JD(S), headed by former prime minister H D Deve Gowda, got 18.4 per cent votes. Gowda's son H D Kumaraswamy is its chief ministerial candidate.

Soon after Congress declared its support to JD(S), Kumaraswamy wrote to the governor informing him that he had accepted the offer to be the chief minister.

"This is to submit to your good self that I have accepted the support extended by the Indian National Congress (I) party for forming the government. In this regard, I seek your appointment today evening between 5.30 pm to 6.00 pm," Kumaraswamy said in the letter released to media.

JD(S)'s HD Kumaraswamy seeks appointment from the Governor of #Karnataka this evening, writes we have accepted Congress's support to form the Government. #KarnatakaElections2018 pic.twitter.com/epuCqf4m17

According to the latest results declared by the Election Commission, Congress has won 74 seats and is leading in four, while JD(S) has won 37. If Congress wins the remaining four, the combine will have 115 seats, enough for a majority. BJP has won 97 and is leading in seven, for a total of 104. Mayawati's BSP, a JD(S) ally, and KPJP have won one seat each.

The usual practice is for the governor to call the leader of the single largest party or pre-poll alliance to form the government, and in the event of a hung assembly, asks him to prove the majority on the floor of the House.

Since the Congress and JD(S) did not have a pre-poll alliance, it remains to be seen if he invites Kumaraswamy to form the government. 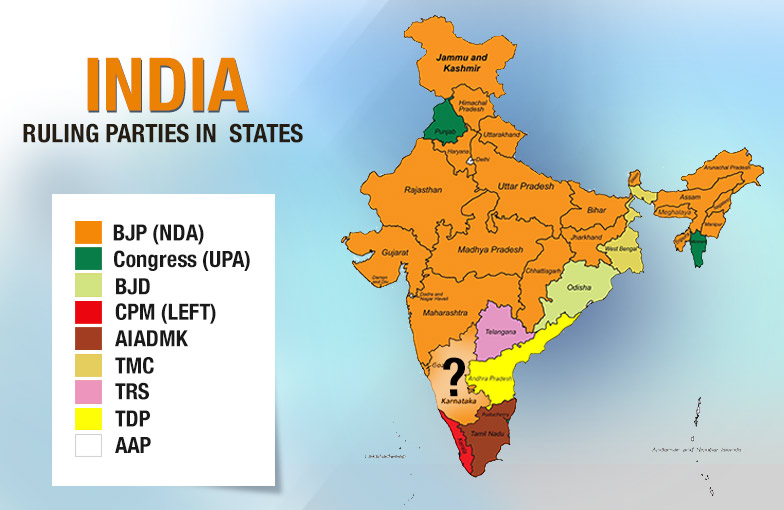