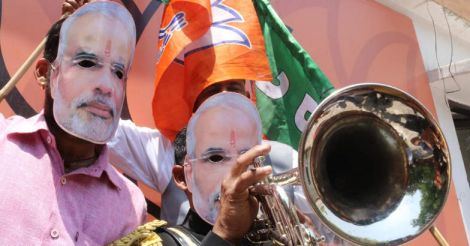 Kottayam: The Karnataka election results have come as a booster shot for the BJP in Kerala as it gears up for a crucial assembly bypoll in Chengannur.

BJP Kerala unit president Kummanam Rajasekharan on Tuesday exuded confidence that the results in Karnataka would reflect in Chengannur, which goes to polls on May 28.

The BJP has fielded veteran leader P S Sreedharan Pillai in the constituency where the party had made impressive gains in the last Assembly polls.

Chengannur has traditionally been a safe seat for the Congress, and the constituency has, for close to three decades, been won by the Congress-led United Democratic Front (UDF).

But in the 2016 assembly polls, Congress candidate Vishnunath, seeking a hat-trick of wins from the seat, had to bite the dust.

One reason attributed for his defeat was the giant strides made by the BJP, which allied with the Bharat Dharma Jana Sena (BDJS), the political arm of the SNDP Yogam, which champions the cause of the Ezhava community in Kerala.

However, this time the BJP-BDJS ties are at an all-time low.

A section of the BDJS is miffed at the BJP for 'not keeping its promises' to its junior ally.

The confidence aired by Kummanam was reflected in the statements made by senior national leaders of the party as well. BJP general secretary Ram Madhav said the party's southward march has begun with the results in Karnataka. Party chief Amit Shah has for long been terming Karnataka the party's gateway to the south.

For the BJP, a victory in Chengannur will give a much-needed boost to Shah’s dream of capturing Kerala in the not-too-distant future.

In the 2014 Lok sabha elections, the BJP contested 18 out of the 20 Lok Sabha seats in the state and secured 10.33 per cent of the votes. And it was only in the 2016 assembly elections that the 'Lotus' (the party symbol) bloomed for the first time in the state when party veteran O Rajagopal won the Nemom assembly seat in the state capital.

In the 2016 assembly elections, the BJP and its allies contested all 140 seats in the state and secured 15.2 per cent votes. The BJP itself contested 98 seats and received 10.6 per cent of the votes.

But a saffron surge in Karnataka could also trigger a silent polarisation in favour of either the ruling LDF or the UDF with the intention to thwart a BJP win.