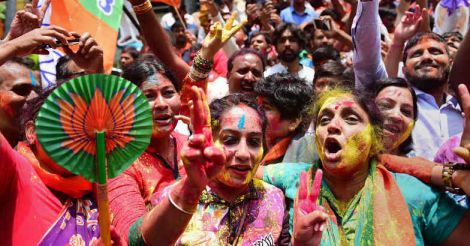 Siddaramaiah was banking on the support of the Lingayats, while granting the religions minority status to the community which made up 17 per cent of the state’s population: File photo

Bengaluru: The BJP’s victory goes beyond Karnataka. The party has gained power in a south Indian state a year short of the crucial general election, while the Congress has lost one of its last remaining strongholds.

The BJP was confident throughout the campaign, judging by prime minister Narendra Modi’s ridicule that the Congress would be a Punjab, Puducherry and Pariwar party after the Karnataka election. BJP leader B S Yedyurappa even said he would swear in as chief minister on May 17.

The Karnataka assembly election was a do-or-die event for the BJP. The party could not afford to lose the state once again at a time when it was preparing for a second stint at the centre.

The real fight was between Modi and chief minister Siddaramaiah, who was considered a strong opponent who was able to counter the BJP’s every blow with equal force. Modi spent considerable energy on the poll-bound state, while Shah was busy with his behind-the-stage strategies. The duo made it sure that the uncomfortable questions were buried in the brouhaha. Surprisingly, demonetisation, the still-rickety GST and even the skyrocketing fuel prices were eclipsed by other issues in public debates.

The BJP focused its campaign on personal attacks, forcing the Congress to reply in the same coin. The aggressiveness cost the Congress dearly as it failed to convey the government’s good work to the people.

Taking a leaf out of the BJP, the Congress spent its energies in community appeasement. The state government granted the religious minority status to the dominant Lingayat community, once considered to be a pillar of strength for the BJP, and particularly its chief minister candidate Yeddyurappa.

The strategy, however, backfired when the BJP sharpened its focus on the community. Shah personally went to the Lingayat mutts to muster support for the party.

Modi, however, did not have it easy in Karnataka. He could expect the chief minister to refute every allegation the very next moment. Siddaramaiah even accused the prime minister of spreading lies in a bid to capture power in the state.

Siddaramaiah matched the BJP’s attempts to cash in on caste equations. He tried his best to quell communal polarisation. He described himself as a “humane Hindu” in contrast with the hate politics attributed to the BJP and its affiliated outfits.

The Congress leader seems to have got his plan wrong while dealing with the BJP in its own turf. Playing to the BJP’s games, he forgot to keep the votes which would have been his. The Congress lost out even in dalit-dominated areas even though the dalit and backward communities have benefitted from the Anna Bhagya Scheme which offered 30 kilos of rice per month.

Siddaramaiah was banking on the support of the Lingayats, while granting the religions minority status to the community which made up 17 per cent of the state’s population. The election results present a different story.

The BJP was a clear winner in all the regions where Lingayats are an influential force, including Hyderabad Karnataka, Mumbai Karnataka and the central region. The party performed well even in coastal Karnataka, where minorities have a significant presence.

Alarmed by Siddaramaiah’s reservation strategy, the BJP set about wooing the other communities to make up for any shortfall in its traditional vote bank.

The Congress, on the other hand, drifted from the other communities with its appeasement of the dominant community. The Vokkaligas, the other key community in Karnataka politics, distanced itself from the Congress. They openly campaigned against Siddaramaiah in his home turf. The community is estimated to have about 10 per cent votes in the Mysore areas. Those votes were divided between the BJP and the Janata Dal (S). The Congress was shattered in the Mysore region, where it had won 27 of the 61 seats five years ago.

The BJP was in a comfortable position compared to the previous assembly election. The BJP camp was split into three ahead of the 2013 election. The party was discredited after five years in power, with two chief ministers having to bow out. The corruption charges against Yeddyurappa were so serious that he ultimately went to jail.

The Congress won 23 of the 40 seats in the Hyderabad-Karnataka region. While the party grabbed a 35 per cent vote share, the BJP had to contend itself with just 17 per cent. Yeddyurappa and his newly formed KJP was one of the reasons for the BJP’s rout.

The active campaign by the RSS was another factor in the win. RSS leader B L Santosh was in charge of the campaigning in the state. The RSS went from house to house accusing Siddaramaiah of dividing the Hindu society. They even reached out to farmers with a Karshaka Mithram programme. One of their programmes was a pledge to stop farmer suicides.