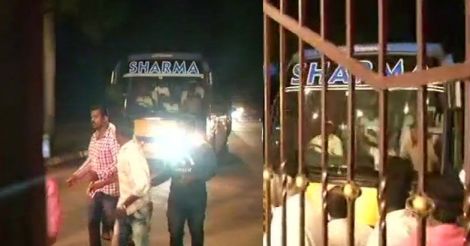 A bus carrying Congress MLAs comes out of a resort in Bengaluru Thursday night. Photo: Twitter/ANI

Bengaluru: Both the Congress and the JD(S) have moved their newly elected MLAs out of Karnataka fearing poaching by BJP which is making a frantic bid so that its chief minister B S Yedyurappa can prove majority on the floor of the legislative assembly. Private buses ferrying the legislators of both the allies arrived in Hyderabad early on Friday morning after leaving Bengaluru around Thursday midnight.

The lawmakers had to spend Thursday in two different hotels in Bengaluru. While the Congress flock was at Eagleton Resorts, the JDS leaders were at Shangrila Hotel.

With the BJP trying to shore up its numbers ahead of the trust vote, Congress-JD(S) combine are pulling in all strings to keep their MLAs together.

Sensing trouble in Karnataka, both the Congress and JD(S) had decided to move its MLAs out of the state. However, their plan to fly the lawmakers out of the state received a blow as the DGCA denied permission for three chartered flights.

Unwind in our 'safe resorts:' Kerala Tourism's tweet to MLAs

The unpardonable absence of Rahul in K'taka

In a late night development, the Supreme Court refused to stay the swearing-in after a rare post-midnight courtroom battle unfolded dramatically over the Congress-JD(S) combine's legal push to stall government formation.

After a nearly three-and-a-half-hour hearing beginning 2:11 am, a three-judge apex court bench also made it clear that the swearing-in and the government formation would be subject to the final outcome of the case before it.

The bench, comprising justices A K Sikri, S A Bobde and Ashok Bhushan, posted the matter for further hearing tomorrow morning and ordered placing before it the letter of support from MLAs presented by the BJP to Karnataka governor Vajubhai Vala while staking claim to form the governmen

Yeddyurappa was administered the oath of office and secrecy by the governor at a ceremony at Raj Bhavan amid loud cheering by his supporters. He has been given 15 days' time to prove majority.