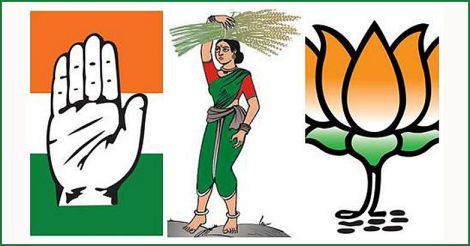 The JD(S) may insist on not tying up with the BJP but their record shows they are master opportunists ever willing to shift to greener pastures. Though, presently, the JD(S) has decided to join the Congress bandwagon, there is no guarantee that it will remain in the alliance even if the junior Gowda, H D Kumaraswamy, is called to form the government by the Karnataka governor. Both the BJP and the Congress have a bitter experience with the predominantly Karnataka-based party.

Chief minister Siddaramaiah had claimed during the campaign that the BJP and the JD(S) had a tacit understanding. The outgoing CM even claimed that Kumaraswamy had met BJP chief Amit Shah as the assembly poll campaign slowly picked up. The JD(S) rejected this charge and the senior Gowda, Deve Gowda, even said he and his family would disown Kumaraswamy if he joined hands with the BJP. 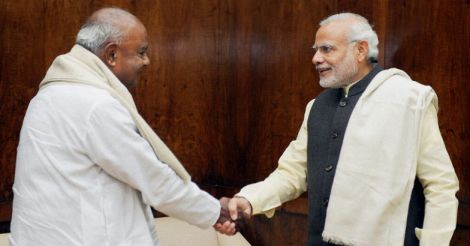 But like son, the former prime minister doesn't keep his promises and like any wily politician changes track as he wishes. Five years ago, as the then Gujarat chief minister Narendra Modi made a bid to conquer the PM seat, Gowda had said, "I will take political sanyas and leave Karnataka if Modi becomes prime minister. His colourful attire, style, NRI funds and gimmicks won’t help him. BJP's ideology is aimed at destroying the unity and harmony in the country."

Shockingly, within 50 days, Gowda seemed to have lost that antipathy to Modi who had demolished his rivals in the May 2014 elections. After attending a tea session with PM Modi, who had invited the Karnataka leader for a 'cup of tea,' Gowda said: " ...Modi gives respect to former prime ministers... even though I was prime minister for only 10 months. It feels good." 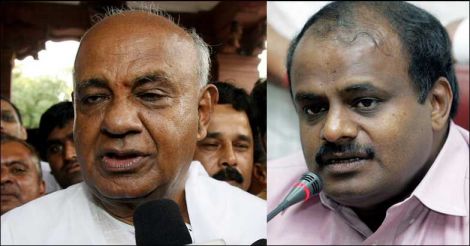 Both the BJP and the Congress have a bitter experience with both the senior and junior Gowdas.

BJP's ties with JD(S) are more than a decade old and it truly started after the latter party pulled out of its coalition government with the Congress, led by Dharam Singh, in early 2006.

The JD(S) and the Congress had formed a coalition government as the Karnataka assembly polls held in April 2004 threw up a fractured mandate as in May 2018. As in the recent polls, the BJP emerged the single-largest party and the Congress and the JD(S) came at second and third places, respectively. To be fair to Deve Gowda, he was reluctant to pull the plug on the first coalition government in the state in January 2006, but he had to surrender to the threat posed by his 42 MLAs out of the total 58.

Then, Kumaraswamy became the CM in February 2006 after securing BJP support. This reluctant politician, who is serious about his film-making and distribution ventures, resigned as CM in late 2007 after 20 months in power amid a political crisis owing to a dispute with the BJP. The first-time MLA who became the CM was initially reluctant to honour the power-sharing deal with the BJP to support a BS Yeddyurappa-led coalition government for the next 20 months of the assembly term when the time came up for that in October 2007. Soon, after a brief president's rule, deputy chief minister Yeddyurappa took over as CM after resolving differences with the JD(S).