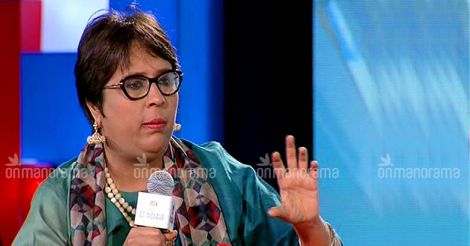 Kochi: The wealthy and the powerful should not dictate the values of journalism, Vinod K. Jose, executive editor of Caravan, has said.

Taking part in a panel discussion on 'Breaking News or Happiness,' he said the basic fact checks should be done in every case.

Stating the case of the Art of Living event reportedly destroying the Yamuna floodplain and the subsequent National Green Tribunal action, he said Sri Sri Ravishankar was on the wrong side of law.

He said the foundation was asked to pay up Rs 5 crore. The foundation said it did not have the corpus when the fact was that its asset base was huge, he said.

Journalist-anchor Barkha Dutt, another panelist, said it was not appropriate to flay journalists. TRPs would change if anything innovative is accepted. People had been cribbing about the things they watch keenly, she said.

On her new digital venture, Barkha Dutt said the good stories were not to be done any more on television. She said it was her responsibility also to create a cogent and robust narrative.

Writer and former civil servant N.S. Madhavan said the beef issue was one example of how the media failed. The story was picked up after four days of the government notification. Also, the media failed to say that slaughter had not been banned outright.

He said the crises facing the media were the “death of great editors, pressure of corporatization, and laxity on part of gathering news.”

We should understand the difference between democratizing news and outsourcing the journalistic agenda. Social media hatred is a major issue and trolling is a major attempt to silence people, especially women.

On the question of unfair representation in newsrooms, Vinod Jose said vernacular press was always ahead of the national media in representing people. Small papers were rooted in community. The media were part of proactive campaigns. Now, such campaigns are mostly driven by advertising, he said.

About the media assuming advisory roles N.S. Madhavan said the traditional magazines should take upon the task of telling people more subtle facts, like child sexual abuse. Society need not look at newspapers for advise, he said.

The critics of bad journalism had not been practicing good journalism, moderator and The News Minute editor-in-chief Dhanya Rajendran said.