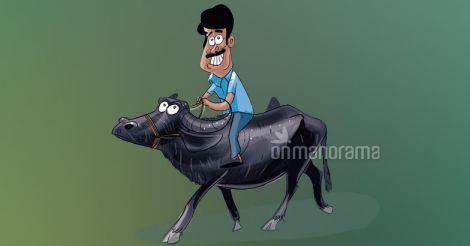 A business entrepreneur in the Gulf happens to be an infamous baddie at home. He has earned quite a lot in the Gulf and goes around with his henchmen in luxurious cars. Of course, he is a good boy in the Gulf and would not dare to bare his dark side there. He is happy concentrating only on his business.

This particular person has a ‘not-so glamorous’ business collecting sewage from cities in the Gulf. Since many cities in Gulf do not have sewage plants to processes the waste, the wastes have to be carried out in tankers and disposed elsewhere. Our domestic-don-turned-entrepreneur runs a business that collects the waste and disposes them elsewhere. Now that he is earning a lot and since police have become proactive in India, our man is focussing on transplanting his lesser-goons to the Gulf, making them all good boys in the process.

Those who chose to remain in the state have now turned to another business that is similar and converts wastes to money - buffalo rearing. Even people with a small plot can consider the potential that these animals bring in. If you have a disused field lying around your place, you are in luck, because buffalos love water and when they get fat enough, you are going to love the money they will bring in.

Junior buffaloes are purchased from Tamil Nadu and brought home, Rs 8000-10000 a piece. They are then let loose into empty fields, rubber groves or other places where there is enough for them to eat. Since they do not need much care as in the case cows, you do not need to hire a skilled hand to take care of them; let them be and soon they will grow fat to fetch you close to Rs 40,000 to Rs 50,000 per animal when they are nine-11 months old. While some animals might not fetch as much, those that are well fed and well groomed would bring in the hard cash. At this rate, with all spending accounted for, one can easily make a neat profit in the deal. However, those who are sentimental might as well not try this because the buffalo they lovingly reared and cared for would eventually end up as a meal atop somebody's table. You also need to consider mortality rates as well as competition before you jump, head first, into the business.