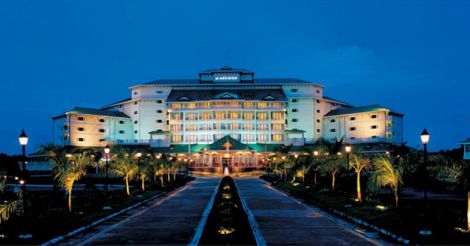 When Narendra Modi was being sworn in on 26 May, the 4000 guests, which included Heads of States, foreign dignitaries, and celebrities, they had to sit under the hot and humid summer weather of New Delhi on the forecourt of Rashtrapathi Bhavan. This brought to light a major drawback in the capital-lack of a convention centre that can seat more than 2500 people. Government owned convention centre Vigyan Bhavan can seat only 1200 guests. Rest of the five star hotels can also seat only around 1000.

International convention organisers look around for venues to hold their events, and that includes God's own country Kerala too. But the best convention centre in India is in Hyderabad. The Hyderabad International Convention Centre (HICC) sitting on 15 acres of land has now become a hub of such conventions. Hyderabad being an aviation hub at a distance of two hours from all the major cities in India also helps a lot. ADB international conference, Pravasi Bharatiya Divas, world conference of bio-technology, world web conference are only some of the events held there. It's estimated that Hyderabad economy gets infused by more than 200 crores annually from these conferences.

Many of such conventions are sponsored affairs. The sponsor companies want to display their wares, and at least 50 stalls are required for the same. Without such a facility the convention centres become mere wedding halls or Rotary clubs conference places.

An international conference means money in every pocket. All flights to the host city would be full, all hotel rooms full. Taxis, autos have a busy time. The restaurants in the city would be jam-packed. All tourist places near the convention centre would get hundreds of visitors. The youth who act as volunteers make money too. But this is fresh money coming from outside the city or state or even the country. Unlike one city dweller's money getting transferred to another city dweller, this is fresh infusion of money from out side and the city's economy benefits immensely.

Unfortunately, the convention facility in Kerala leaves much to be desired, as these are mere banquet halls seating 100 to 1000 guests. Large convention facilities with 2500 seats should come along with star hotels. In Delhi two large convention centres in Pragathi Maidan and Dwaraka are being built. Not only major cities, but those places that can be reached within one hour from the Airport are also fit for such projects. The demand is high, it's high time government took steps to attract investors to it. If Kerala gets new convention centres on the model of HICC, then it could very well become God's own convention venue.

Last Post: Conventions have art programmes and parties after sunset. It's no place to talk about prohibition of liquor. But in kerala, a day's license to serve liquor requires Rs. 50000. Along with bribes it comes to around Rs.65000. And the application for the same needs to be taken to the capital, Thiruvananthapuram, to get it sanctioned by the Excise Commissioner!