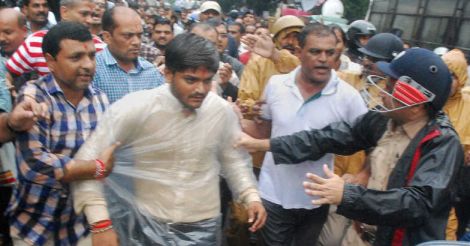 The Patels were the farming community in Gujarat before independence. (File photo)

Why are the Patels pitching a strike against the government in Gujarat? While some believe that the stir gets its energy from the ‘interest’ of some, it is actually a global phenomenon called Technology Displacement which is driving the stir. This is a phenomenon in which existing opportunities are killed by new technology.

The Patels were the farming community in Gujarat before independence. When land reforms were implemented in that state, Patels became owners of the land in which they only had the right to toil. Patels soon became rich because of income from their own lands.

However, as time went by, agriculture started reaping losses and to add to the problems, the new generation was no more interested in farming. Small industries also started closing down. While Modi's tenure saw investments flowing in, the loss of jobs could not be remedied. While industries started looking to hire educated people, the skilled force found it difficult to find a job.

To add to the woes came technology displacement, the phenomenon that shut down telephone booths because all had mobiles in their hands. The same phenomenon led to the death of film cameras as their digital counterparts made their entry and taxis and auto rickshaws saw Uber encroaching into their business space.

The same problem is rife in Europe and the US where it is being researched as to how existing work-force may be retrained. Harvard Business Review has published a thesis on this.

Now, the focus is on how to surpass the challenges of the tech world. Education needs to be improved while intelligence and analysis have also to be improved.

However, do remember that in spite of huge aeroplanes, ships are still in business. In spite of YouTube and other gizmos, people still go to good, old theatres to watch movies. Even in the US, online sale of vegetables and fruits is only 1 per cent of total sales. That is because you need to see, touch and feel products such as vegetables and fruits. You can't order them online as you would do with shoes.