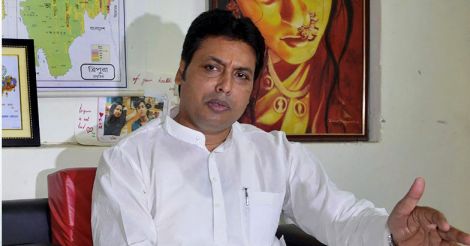 Tripura Chief Minister-elect Biplab Deb interacts with the media ahead of his swearing-in ceremony which is scheduled to take place on 9 March, in Agartala. PTI

In an exclusive interaction with Onmanorama during his whirlwind tour of Chengannur ahead of the by-election on May 28, he said, "I am asking all my friends to understand Bharat." On being asked abut the CPM's crusade against the BJP and its symbols of Hindutva which the chief minister has often hinged on to, he said "I want to tell Sitaram Yechury, the highest leader of the CPM, something. His mother gave him the name 'Sita Ram' because, he should understand, that she understands the country. If he (Yechury) gives a thought to the name, he will get all the answers to the questions the CPM is posing."

Making a fervent plea to 'develop' Kerala and pitching for a new pace of development, Biplab Deb, known for his quirky and sometimes skewed take on mythology and history, said there was every possibility of Tripura repeating in Kerala (Biplab Deb was in news for having stated that the Internet and satellite existed since Mahabharata era) .

Stating that the CPM and the Congress had supper together, he said, "we have seen Sonia Gandhi and Pinarayi Vijayan sharing the stage in Karnataka. There's not much distance between Kerala and Karnataka. In Kerala too, the Congress and the CPM are engaged in adjustment politics. They help each other to come to power every five years."

Making a strong pitch to make Kerala a hub of development, he said the progress of the state was the result of individual achievements of the people here. "The buildings that we see here have been made using the foreign remittances earned by the expatriates. I challenge the government here to prove how much development has come as a result of government policies. If they prove that the development in Kerala was a result of the policies of the successive governments here, I'm ready to quit politics," he said.

Lisiting out the ethno-geographic and socio-political similarities like high literacy, climate, and health indices, he said the Kerala BJP unit was quite capable of changing the prospects of the state.

"I don't have to give them any tip. They have already gathered 16 per cent votes. There are so many similarities between Tripura and Kerala including the food habits. So, as in Tripura, the Communists will be defeated in Kerala too. The Chengannur bypoll is an opportunity for the people to think differently," he said.

He said the party did not intend to divide people on the basis of caste and community to win elections. "We just have to follow prime minister Narendra Modi's policy of 'sabka saath, sabka vikas' (development for all)," he said.

On the Karnataka imbroglio, Biplab Deb said the party was sure to make gains and more inroads.