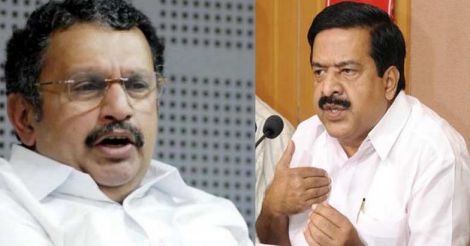 After Chengannur fiasco, K Muraleedharan (L) has taken a dig at Ramesh Chennithala

New Delhi: Congress leader K Muraleedharan, MLA, has come out with a veiled criticism against opposition leader Ramesh Chennithala over the Chengannur fiasco.

“The Congress has never trailed in my booth in any election and I will never allow that,” said Muraleedharan here.

The Congress candidate D Vijayakumar had trailed his CPM rival Saji Cherian in the polling booth located at Chennithala’s native place during the recent assembly byelection. Criticism is pouring in from all quarters over the drubbing the Congress received in the bypoll.

Chennithala has, meanwhile, owned up for the bypoll defeat in the Chengannur constituency. He admitted to shortcomings in the party organisation, while asserting that it is unfair to blame one or two leaders, when everyone is responsible for the loss. Congress had campaigned solidly in Chengannur, Chennithala said.

Muraleedharan also made it clear that he will not leave his Vattiyoorkavu legislative assembly constituency till the Lok Sabha elections. Muraleedharan claimed he is not eyeing the KPCC chief’s post.

Rahul, who is now in the USA in connection with Sonia Gandhi’s treatment, will return to India on June 5. He will hold discussions with the Kerala leaders over the next two days.

The high command is planning to appoint a new chief for the KPCC within a week. The discussions are expected to take up issues including a new UDF convenor and candidates for the upcoming elections to fill the vacant Rajya Sabha seats in Kerala.

Ahead of the meeting with Rahul, the general secretary in-charge Ashok Gehlot spoke to Chandy, Chennithala and Hassan.

Among those considered for the KPCC chief’s post are, Mullappally Ramachandran, Kodikunnil Suresh, K V Thomas and K Sudhakaran.

Meanwhile, the losing Congress candidate in the Chengannur bypoll slammed the state leadership of his party. Vijayakumar stated that the party leaders couldn't defend the rival's charge that he was an RSS activist. Leaders who were in charge of the constituency are responsible for the defeat, Vijayakumar stated, adding they failed to detect the undercurrents and respond adequately. In the 'Counter Point' programme on Manorama News, Vijayakumar even said neither the party leaders nor the followers could understand the campaign strategy in the constituency.

From the onset of the campaign, Congress rivals propagated that Vijayakumar was an RSS man. He received 46,347 votes and stood second behind CPM candidate who secured a historic mandate in the central Travancore constituency with 67,303 votes.