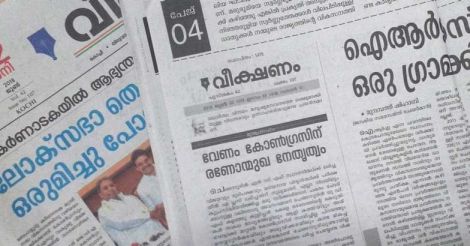 It was the duty of the opposition to expose the 'most unpopular' chief minister like Pinarayi but it 'failed' in its attempt, Veekshanam said.

Thiruvananthapuram: In further embarrassment to the Congress in Kerala, which faced debacle in the recent Chengannur bypoll, its mouthpiece 'Veekshanam' on Saturday came out against factionalism in the party and called for a 'leadership change' in the state.

The daily, in its editorial, rained harsh criticism against the state leadership, saying it 'spoiled a good opportunity' to take revenge on the LDF government led by Pinarayi Vijayan, which is a 'total failure' in all fronts.

It was the duty of the opposition to expose the 'most unpopular' chief minister like Pinarayi but it 'failed' in its attempt, the daily said. Listing out the weaknesses of the party, the editorial said the leaders are only interested in revamping the organisation at the state and district levels. But, the 'mandalam' and 'booth' committees, the spinal code of the party's grassroot level structure, were in a weak position, it claimed.

The Congress was facing setbacks in the state as leaders with less capabilities come to the forefront of the party in the name of groupism, the 'Veekshanam' said. "The front line of the party is filled with those who are ready to please the leaders. The party will not progress in the state until it replaces efficient leaders and followers from the booth level itself," it said.

It is high time to handover the leadership of the party to a generation with political commitment and spirit, the daily said adding the present leaders should quit their present positions and become the advisors and guiding forces of the newcomers. Apparently referring to the alleged religious appeasement by the party, the mouthpiece wanted to end the practice of visiting markaz (Islamic outfit), mutts and 'aramanas' (bishop houses). It also urged the All India Congress Committee (AICC) to take over the responsibility of bringing changes in the state unit and make it ready for the 2019 Lok Sabha polls.

The party mouthpiece's criticism came a day after senior leader V M Sudheeran blamed factionalism in the state unit for the poor showing in the Chengannur byelection.

During his stint as KPCC chief, Sudheeran had faced strident opposition from the two major factions - one led by senior leader Oommen Chandy and other by leader of opposition in the state assembly Ramesh Chennithala.

Meanwhile, Chennithala rejected the charges and said the United Democratic Front (UDF)-led by the Congress had fought the bypoll unitedly cutting across groupism.

However, he admitted that the party has some organisational weaknesses.

"The party has some organisational weaknesses. But, it is not proper to blame only some leaders for the defeat of the Congress candidate in Chengannur," Chennithala, also a former KPCC president, said while addressing a meeting at the party headquarters here today. Echoing the same sentiments, former CM Oommen Chandy said the party would examine the reasons for the defeat and would take necessary corrective measures.

Another senior leader K Muraleedharan said unless changes were made in the organisational set up in the party, 'Chengannur will repeat.'

The ruling LDF's Saji Cherian won by a margin of 20,956 votes over his nearest Congress rival in the Chengannur bypoll necessitated by the death of sitting member K K Ramachandran Nair (CPM) in January 2018.