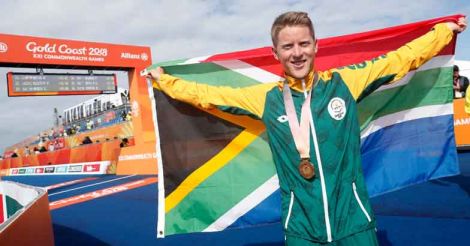 Schoeman, who won bronze at the 2016 Rio Olympics, celebrated for all of the finishing straight and high-fived a team mate running the opposite way, to clinch the sprint-distance event ahead of Australia's Jake Birtwhistle and Scotland's Marc Austin.

England's Jonny Brownlee, the silver medallist in Glasgow four years ago and at the Rio Olympics, finished seventh, while two-time Olympic champion Alistair was 10th.

The Brownlees had led a breakaway pack of six on the 20km cycle leg, but then immediately dropped away out of transition into the run with Schoeman and New Zealand's Tayler Reid establishing a large gap.

Schoeman, however, put the hammer down to not only drop Reid within the first 400m of the 5km run but also pulled away from the rest of the field.

He took a 14-second lead into the final 2.5km lap and slowed as he ran the last 200 metres, with Birtwhistle finishing fast to become the host nation's first medallist of the Games.

"It was a tough race, the swim was rough," Schoeman told reporters. "My legs were exhausted at the start (of the run) but I gave it a surge and kept up the momentum, I just had to stay cool and save energy.

"I just kept thinking 'don't give up, anything can happen' (and) that last 50 metres felt amazing."