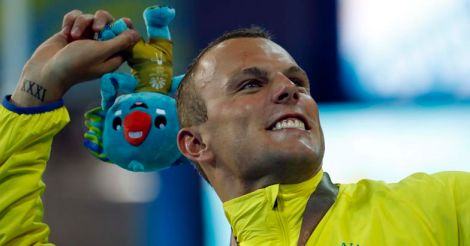 Gold Coast: Kyle Chalmers definitively demonstrated he had recovered from heart surgery last year to clinch two golds as the Australians dominated the second day of the swimming at the Gold Coast Commonwealth Games on Friday.

Despite a torrential downpour, 'Australia Advance Fair' was played six times from nine events at the Gold Coast Aquatic Centre, with the host nation completing two one-two finishes and a clean sweep in the women's 100 metres butterfly.

The 19-year-old Chalmers led home compatriot Mack Horton in their first one-two finish in the 200m freestyle then anchored the hosts to their 10th Commonwealth Games 4x100m freestyle relay title since 1970.

Chalmers missed all of 2017 to have a second corrective surgery for Supraventricular Tachycardia (SVT), a condition that rapidly increased his heartbeat during exercise.

The teenager, who won the 100m freestyle title at the Rio Olympics, had no issues on Friday as he pipped a fast-finishing Horton to clock one minute, 45.56.

He then drove home some strong work by the returning James Magnussen and Jack Cartwright in the relay as the Australian men easily accounted for what was a low-quality field, to record a time of 3:12.96 seconds.

"It was a big night in the pool for us," said Magnussen, who took 2017 off to have shoulder surgery. "We probably got a few gold that we didn't expect, and we're probably ahead of where we thought we'd be.

"One of the most exciting things - with me being an older member of the team - is the younger athletes coming through.

"There's some young athletes that could really make themselves household names. That's exciting."

Chalmers' double gold strike only highlighted the rush of medals for the host nation, with Mitch Larkin and Brad Woodward also producing a one-two finish in the men's 100m backstroke.

Larkin clocked 53.18 seconds with his 19-year-old team mate finishing quickly in the lane next to him in 53.95. Canada's Markus Thormeyer was third.

"To share a podium with Brad is just awesome," Larkin said.

"I don't really mind about the time. I was a little bit slower than I would have liked, the plan was to get out a bit quicker and hold on, but I had plenty left in the tank."

Emma McKeon then led home a clean sweep of the women's 100m butterfly in a Commonwealth Games record time of 56.78 ahead of Madeline Groves and Brianna Throssell.

"I actually didn't realise at first until I saw the other girls celebrating as well," said McKeon, who helped Australia to a world record in the women's 4x100m freestyle relay on Thursday. "It makes it a more memorable moment having Australia on 1-2-3."

Clyde Lewis, who was a replacement for Larkin in the men's 400m individual medley, produced a controlled final 200 metres to win the title ahead of a fast-finishing Mark Szaranek of Scotland and New Zealand's Lewis Clareburt.

"When I got the call-up to do it, there was no hesitation to say yes, and it all paid off in the end," said Lewis, who had to be helped to walk by an official after the race.

Tim Diskin completed the haul of gold medals for the hosts when he won the men's para-swimming S9 100m freestyle.

England, who had led the medal table after the first day with four golds, clinched just two on Friday when Sarah Vasey surprised fastest qualifier Alia Atkinson of Jamaica to clinch the 50m breaststroke.

The para-swimming events are included in an integrated medal table for the sport, with the hosts now comfortably ahead with eight golds, seven silver and eight bronze.