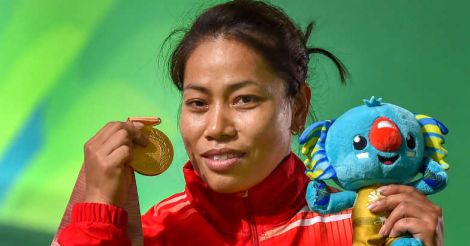 "Although I had done better in the Commonwealth Championships but still I am ok with what I managed today," Chanu, an employee of the Indian Railways, said after her triumph.

The Indian broke down when she was presented her medal, the performance pressure of the last few months finally releasing at the podium.

"A lot of people said that probably I wasn't good enough for a medal. My back injury that I picked up at the World Championships last year is still not fully healed. I am probably at 90 per cent right now," said the soft-spoken youngster.

"Our physios are not allowed to be with us in the competition area due to accreditation issues. I broke down at the medal ceremony thinking about all that. It all just came crashing down, the pressure of the past few months," she added.

Sanjita had won a 48 kg category gold medal at the 2014 Commonwealth Games in Glasgow.

"I am quite happy with the achievement that I claimed two gold medals," she said.

The record she broke on Friday was also in the name of an Indian, Swarti Singh, who lifted 83 kg in snatch at Glasgow Games.

Sanjita had earlier claimed the gold with a total effort of 195 kg (85 kg+110 kg) in the Commonwealth Championships last year.

Indian weightlifters have claimed two gold and a silver thus far in this edition of the Games.

On Thursay, Mirabai Chanu (48 kg) had smashed three Games records en route her gold medal after P Gururaja opened the medal account with a silver in the men's 56 kg category.