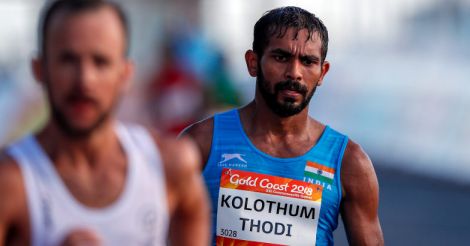 Gold Coast: Indian race walker K T Irfan and triple jumper V Rakesh Babu were sent home in disgrace from the Commonwealth Games and a strong reprimand issued to the Indian officials here after the duo was found guilty of breaching the event's strict no needle policy.

"Rakesh Babu and Irfan Kolothum Thodi are with immediate effect not permitted to participate in the Games. The accreditation of Rakesh Babu and Irfan Kolothum Thodi was suspended with effect from 09:00 hours on April 13, 2018. Both athletes were removed from the Games Village," the Commonwealth Games Federation president Louise Martin said in a strongly-worded statement.

"We have asked the Commonwealth Games Association of India to ensure both athletes depart Australia on the first flight available," it added.

While Irfan was already through with his 20km race walk event, finishing 13th, the 28-year-old Babu was to participate in Friday's triple jump final after qualifying 12th for the competition.

The CGF, though, said there was no doping offence involved.

Despite repeated attempts, India's chef-de-mission Vikram Singh Sisodia did not respond to the latest embarrassment after the Indian contingent escaped unscathed when a needle was found outside a boxer's room.

At that time the CGF had merely issued a reprimand for not disposing the syringe as prescribed, clearing India of any norms violations.

The Commonwealth Games Federation Court heard the latest complaint on Thursday after its notice by the CGF Medical Commission.

"The Chef de Mission of the Commonwealth Games Association of India, general team manager, Namdev Shirgaonker; athletics team manager, Ravinder Chaudhry; two athletes, Rakesh Babu and Irfan Kolothum Thodi; and other individuals (team managers) associated with CGA India were found by the CGF Federation Court to be in breach of the CGF No Needle Policy for the Games (the No Needle Policy). All five individuals were found to be in breach of the Policy," the CGF stated.

Athletes are barred from using syringes unless there is prior declaration made to the medical commission or a declaration is made within 24 hours of usage.

The CGF court found that the testimonies given by a cleaner manager at the Games and Australia Anti-Doping Authority Principal Investigator were credible.

All the four paragraphs refer to the norms related to the declaration of needle usage.

"The CGF shall issue a strong reprimand to Vikram Singh Sisodia, Namdev Shirgaonker and Ravinder Chaudhry that they and other persons failed to ensure compliance with the No Needle Policy.

"The CGF shall advise Vikram Singh Sisodia, Namdev Shirgaonker and Ravinder Chaudhry that any further infractions by any member of the Indian Team of the No Needle Policy could result in the withdrawal of accreditation of the offending person."