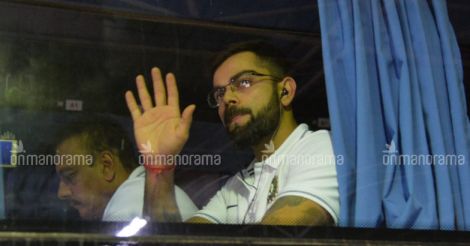 Virat Kohli and Co will be looking to continue their series winning streak at home. Photo: Rinku Raj Mattancheriyil

Thiruvananthapuram: As India and New Zealand are ready to lock horns in the series-deciding third and final Twenty20 match on Tuesday, the capital city should consider itself incredibly lucky to host an encounter of this stature.

The first-ever T20 international match hosted by the state at the Sports Hub, Kariavattom, is expected to be a high-octane thriller with both teams going all out to wrap up the series. The hosts will be looking to continue its series winning streak at home, while the Black Caps will be determined to stop the Indian juggernaut and buck the trend.

Players, officials and support staff of both India and New Zealand teams arrived in the capital late on Monday to a rousing welcome. The players, after their arrival at the airport, were taken immediately to the Leela Raviz, Kovalam.

Though the team managements had informed the organizers that the teams would practice at the venue on Monday, the plan was dropped as the players were exhausted after back-to-back matches and long journeys. Special arrangements have been made for them to undergo training at the hotel gym.

The team captains took a look at the pitch at the Sports Hub in Kariavattom Monday morning.

There were brief spells of rain in Thiruvananthapuram and surrounding areas during the past two days. The meteorological department has forecast rain on Tuesday. Private websites providing weather information have also predicted moderate rains between 3 pm and 7 pm on match day.

However, the stadium boasts the Fishpond Drainage system, which will efficiently tackle the problem of rain delay. The pitches have been remaining under cover since Saturday.

The inclement weather conditions notwithstanding, ticket prices for the match have skyrocketed in the black market.

According to sources, tickets priced at Rs 1,000 are sold at double the price through social networking sites, including Facebook.

Fans on the lookout for tickets are being warned not to be conned into buying fake tickets. The tickets issued by the Kerala Cricket Association are printed with a hologram.