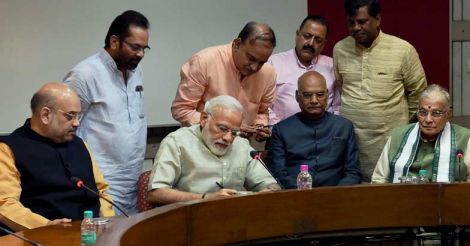 Watched by prime minister Narendra Modi, a battery of NDA chief ministers and top BJP leaders, 71-year-old Kovind filed the papers for the July 17 polls with the Congress-led opposition nominee Meira Kumar being his rival in a 'dalit verus dalit' battle. The candidature of Kumar, a former Lok Sabha speaker, was announced on Thursday.

With more than 60 per cent of the members of the president's electoral college pledging to back Kovind, the election of the lawyer-turned politician as the 14th president to succeed Pranab Mukherjee is virtually certain.

Nominations close on June 28 and counting of votes will be taken up on July 20. The term of president Mukherjee ends on July 24.

BJP president Amit Shah and party veterans LK Advani and Murli Manohar Joshi were present during the filing of nominations.

All chief ministers of BJP-ruled states and its allies except Manohar Parrikar of Goa and Mehbooba Mufti of Jammu and Kashmir besides their counterparts K Chandrashekar Rao (Telangana) and Edappadi K Palaniswami(Tamil Nadu) were among those present. 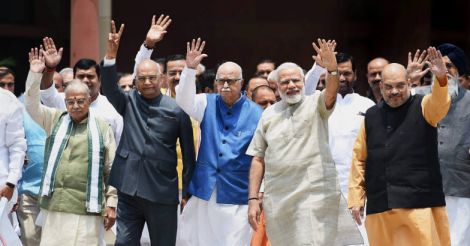 Besides NDA constituents, which comprise over 48.6 per cent of votes in the electoral college that will elect the next president, regional parties such as the AIADMK, BJD, TRS and JD(U) have announced their support to Kovind.

Kovind is guaranteed to get more than 61 percent of votes, and the finally tally depends on how some still- undecided regional parties vote, BJP sources said.

Once elected, Kovind will be the second Dalit to occupy the highest constitutional office. The first was K.R. Narayanan, who was in the Rashtrapati Bhavan in 1997-2002.

After filing his papers, Kovind sought to reach out to the opposition by asserting that the president's office was above party politics and that he did not belong to a party.

"Since I became the governor I do not belong to any political party," said the former head of the BJP's Dalit Morcha.

"It is my belief that the post of the president is above party politics and I will strive to keep it so," he said in a brief address to the media.

The former Rajya Sabha MP said he would do "everything possible" to maintain the dignity of the highest office.

"I appeal to all members of the electoral college for support," Kovind said.

He named several former presidents to cite the "great traditions" of the office and stressed the Constitution was supreme in the country.

"That its supremacy is maintained is very important," he added.

Underlining his agenda, he said he would work for the country's "all-round development, fulfillment of youths' aspirations and encouragement to modern education".

"I will strive to see to it that the dream to build a new India which is developing continuously when we celebrate 75 years of independence in 2022 is fulfilled," he said, reading out from a prepared text.

In a reference to the country's security, he noted that the president was the supreme commander of the armed forces.

"The security of our country's borders should be our top priority," he said.

India is the "largest and greatest" democracy, he said as he thanked parties that had supported his candidature.

A low-profile Dalit leader who held various organizational positions in the BJP, Kovind was made the Bihar Governor in 2015 after the NDA came to power in May 2014.

The name of the two-term Rajya Sabha member did not figure among the probables but his nomination by the BJP is now being seen as a "political masterstroke".

He enjoys a clean reputation and has steered clear of any controversy in his over 26-year-old political career. His Dalit background makes him a sound political choice for the saffron party working overtime to woo Dalits.