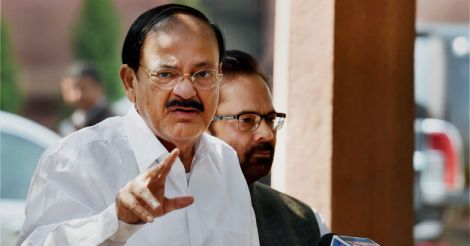 New Delhi: Union minister M. Venkaiah Naidu Monday resigned after he was chosen as the NDA's candidate for the vice-presidential election.

The BJP Parliamentary board, in a meeting Monday, picked Naidu for contesting the poll for vice-president, the post he is almost certain to occupy.

A source said Naidu has tendered his resignation. He was holding two portfolios of Information and Broadcasting, and Housing and Urban Affairs.

"Although Naidu was not required to resign technically, he has tendered his resignation to set high political standards as he has entered the electoral fray (for vice-presidential position)" he said.

"M. Venkaiah Naidu has resigned from his ministerial responsibilities. The additional charge of the Ministry of I&B has been given to Smriti Irani," Modi tweeted.

"Additional charge of Moud_India (Ministry of Urban Development) has been given to Tomar," he said.

Irani already heads the Textile Ministry, while Tomar is in charge of Rural Development and Panchayati Raj.