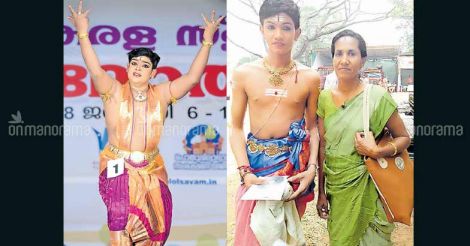 Thrissur: A Anandan from Chavara in Kollam and Nagarsh Nateshan from Triprayar, who are in Thrissur to take part in the school arts festival, are not known to each other. But somewhere their lives have crossed paths.

When Cyclone Ockhi hit the Kerala coast, Anandan's father Ashokan was out in the sea fishing. Though he returned safely, the cyclone and its aftermath hit Ashokan's efforts to send Anandan to the school festival.

However, by winning an A grade, Anandan has given his father a reason to smile.

Ashokan has not ventured into the sea after Ockhi. When Anandan was performing Bharatanatyam in high school section category, Ashokan was not near him. Because, he had to raise funds for his son's Kuchippudi performance. Leaving wife Manimol and son in Thrissur, Ashokan had returned to his native to scout for the funds.

The stay of Anandan and his mother in Thrissur has been arranged by a student from Chavara.

Anandan's elder brother Abhiram died in an accident when he was 10 years old. When Anandan withdrew into his shell following his sibling’s death, his parents asked him to visit a nearby dance school thinking that it might provide him some diversion. But, as fate would have it, the school authorities requested his parents to let him learn dance. He is a class X student of Chavara Guhanandapuram HSS and learns dance under Deepti Kumar.

When Nagarsh was performing on the stage, his father Nateshan was fishing in the sea. After the cyclone hit, Nateshan couldn't go to the sea for several weeks and it became difficult for him to make ends meet.

Nagarsh is the only son of Nateshan and Sati, and is a plus two student of Kazhimbram VPM Higher Secondary School. Despite their hardships, Nateshan has been learning dance for the past 14 years. His teacher Girish Valappad only takes half the fee from Nagarsh. Though he wants to continue his dance class, Nagarsh is not sure how long he can continue in the face of difficulties.

However, at Kalolsavanagari, the blessings from their fathers are keeping the students in good spirits.