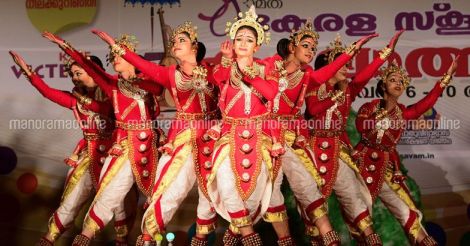 Several students fainted after the events got postponed indefinitely.

Thrissur: Instances of delay in starting events and participants collapsing owing to sheer exhaustion are a common occurrence in school youth festivals. Though the State Child Rights Commission is aware of the matter, its hands are tied as no formal complaints have been registered in this regard. Commission chairperson Sobha Koshy said action would be taken in the event of at least one complaint being filed.

One of the worst incidents this year so far was the high school drama competition that was scheduled to start at 9am Sunday. The event began hours later and was wound up at 6am Monday. Several students collapsed during the event. A similar scene played out at the Oppana contest.

Several reasons have been cited for the delays, including increasing number of appeals and shortcomings on the part of organizers. On the first day of the festival, the HSS Mohiniyattam event was to begin at 10am, but even by 11am, only two contestants had arrived at the venue.

Even though announcements were repeatedly being made asking the respective volunteers to bring contestants belonging to each district, there was little response. As a result, the event began several hours late.

The child rights commission is of the view that the poor facilities at the venues of the sub-district and district youth festivals lead to mounting appeals.

For instance, music and dance events would be held at adjacent stages. This would often result in a cacophony.

Though organizers can conduct events smoothly, it is not being done.

Another bane of sub-district and district youth festivals are unscrupulous judges. Allegations of fixed results are common, leading to rise in the number of appeals. This reflects in the state-level event also, according to the child rights panel.

The commission also blames a section of parents who see their children reaching the state level as a prestige issue. Commission authorities said that they had spoken to the students, who opened up on the pressure exerted by parents.

The commission said though it has been asking the education department to stop the practice of awarding grace marks to winners in the youth festival, no action was taken.

The education department had replied to the commission that the issues would be solved when the youth festival manual was revised.

However, with no change in the situation even after the manual revision, the commission said it would summon the officials concerned, including the DPI, and seek explanations.

Read more from our exclusive coverage of the Kerala Kalolsavam