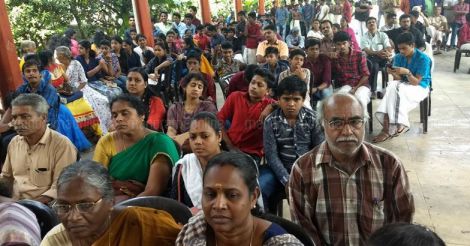 Those who forged child rights commission documents for the youth festival appeals had levied up to Rs 50,000.

Thrissur: The state Crime Branch cops have taken into custody two dance masters accused of forging documents of the child rights commission for filing appeals to contest in the state school youth festival. A teachers' association leader also faces interrogation in this connection.

The police claim that a 'mafia,' which even names the judges at the festival, is involved in the crime.

Those in custody, Suraj from Cherpu in Thrissur and Joby from Kozhikode, could be formally arrested on Wednesday, even as the police are seeking two more people.

Sources say the accused had forged similar documents in previous years too, and had influenced judges. They organize fake appeals for those who have been disqualified at the district-level contests, and obtain marks for them from judges. A 'Vattapattu' team that came from Malappuram that filed an appeal was of very low standard, it is pointed out.

The teachers' association leader is known to have interfered in the appointment of judges for the festival. At the Thiruvananthapuram district youth festival, 21 judges were changed at the last moment after it was known that he had influenced them.

It was the officials at the Directorate of Education who first found that documents submitted with the appeal were forged. The director of public instruction (DPI) was immediately informed. The chief minister's office then entrusted the inquiry to the Crime Branch.

Inspector general S. Sreejith, who was in charge of the investigation, said the gang involved in the crime has links across the state. They had taken Rs 8,000 to 20,000 for each appeal. The parents of contestants gave the money, trusting the documents in the name of the Kerala State Commission for Protection of Child Rights (KeSCPCR) as genuine. The documents submitted to the DPI along with the appeal for the 'Vattapattu' team from Malappuram was the first one that was found fake.

Three documents from Thrissur and one from Malappuram were later found as forged. It is seen that at least 12 appeals were backed by forged documents. Officials had pointed out that two appeals in the dance section were found supported by fake documents, but they were forced to accept them. The Crime Branch on Tuesday gathered details from the two mothers who submitted these documents.

According to sources, those who forged child rights commission documents for the youth festival appeals had levied up to Rs 50,000. A woman from Thrissur had called a contestant from Palakkad and demanded the sum, promising door delivery of the document. The dance master of the contestant, who knew that the KeSCPCR documents come free, told his student that he suspects a fraud, and persuaded him to stay off.