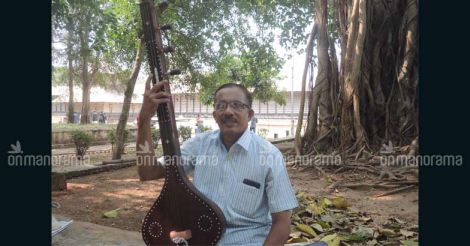 Sasikumar developed the customized Gayatri Thamburu to overcome the difficulties in carrying away the traditional Thamburu which is large in size.

Thrissur: Kummanam Sasikumar, a retired music teacher, has been gifting a Thamburu designed by himself to one of the winners of classical music contest in high school segment in the State School Kalolsavam for the past 19 years. He does not want to break away from the practice this year also. Hence, he arrived here on Monday in search of the lucky talent at the 58th edition of the Kalolsavam. However, he will have to return with the Thamburu and a broken heart this time, thanks to the revised Kalolsavam manual.

Sasikumar, who retired from Brahmanandodayam Higher Secondary School in Kalady after 34 years of service, will not be able to give away his special gift to this year’s winner as the revised rule does not allow private persons to offer gift to the winners.

Sasikumar developed the customized Gayatri Thamburu to overcome the difficulties in carrying away the traditional Thamburu which is large in size. He was prompted to explore the idea of a small and lightweight Thamburu after once being thrown out of a packed KSRTC bus by the conductor for carrying the large instrument. His invention was received well by the music world and it was used for concerts by maestros such as Neyyatinkara Vasudevan, Jaya-Vijaya brothers, Ponkunnam Ramachandran and Mavelikkara Prabhavarma. It costs around Rs 10,000 to make it. Sasikumar has been making the Thamburu on demand.

“Music gave me my life and state school youth festival has played a large part in it. Hence I decided to gift the Thamburu to the winners of classical music to encourage them. I have been gifting it to the winners in boys and girls categories in alternate years for 19 years now, with the permission of the organizers,” he told Onmanorama on the sidelines of the Kalolsavam.

The winners who have received the token of appreciation from Sasikumar include noted singers Najeem Arshad and Vaikom Vijayalakshmi. “I’m happy to be a part of the beginning of Vijayalakshmi’s illustrious career as an exponent of Gayatri Veena. I thank the organizers of the Kalolsavam for giving me an opportunity for that,” he said, recollecting the festival of 1997 when Vijayalakshmi received the Thamburu from him. The Thamburu later took the shape of the Gayatri Veena, he said.

As per the revised Kalolsavam manual, the winners are decided only by grades. Hence there could be more than one ‘A’ grade winner which makes it difficult to find the best singer. However, Sasikumar suggests that he can give away the gift to the student who scored maximum marks if he is allowed to know who it is. He was trying to contact the organizers for that.