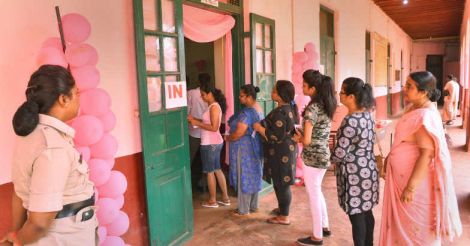 The pink booths are entirely managed by women, right from the returning officer to the security personnel.

Bengaluru: From all-women managed 'Pink Booths' to the use of third-generation Electronic Voting Machines, the assembly elections in Karnataka are marked by several firsts.

The country's IT hub saw electoral authorities initiate a slew of initiatives targeting a voting percentage of 75%. As the outcry about the alleged vulnerability of the EVMs to tampering grew louder, the election commission has come up with the 'M3 EVMs' that are tamper proof and stop when attempts are made to meddle with it.

However, election to the Rajarajeshwari Nagar has been deferred owing to large-scale malpractices and a row over seizure of over 9,750 voter ID cards from a flat.

The machine, according to sources in the office of the chief electoral officer, has features like display of battery status and digital certification. The machine can report about the malfunction on its own, they said.

In a women-oriented step, 450 "pink booths" called 'Sakhi' have been set up. Sending a message of women empowerment, they are entirely managed by women, right from the returning officer to the security personnel, the sources said.

Adding a riot of colours, the EC has set up ethnic polling booths in Mysuru, Chamarajnagar and Uttar Kannada districts where polling booths match the lifestyle of tribal masses living there. Like in every election, each booth is equipped with facilities such as wheelchairs for the differently abled to exercise their franchise easily.