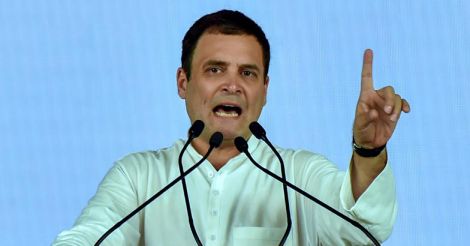 Rahul Gandhi hailed the unity shown by the Congress-JD(S) combine and said the opposition parties will work together to defeat the BJP.

New Delhi: In a blistering attack on prime minister Narendra Modi following the resignation of Karnataka chief minister BS Yeddyurappa ahead of the trust vote, Congress president Rahul Gandhi on Saturday termed him "corruption" and that Modi, BJP chief Amit Shah and the RSS considered no institution "worthy of respect".

Addressing the media here shortly after Yeddyurappa's resignation, he said the Congress will work with other opposition parties to defeat the BJP in 2019 Lok Sabha polls.

Gandhi said Modi's model of leadership is not that of democratic person but that of a dictator and "even Supreme Court knows that".

Accusing Modi of promoting corruption in Karnataka to gain support for the BJP, which had emerged the single-largest party amid split verdict in by the May 12 assembly election, he cited attempts at horse-trading, including purported telephonic conversations of some BJP leaders to get support of Congress and Janata Dal-Secular (JD-S) legislators, who formed a post-poll coalition.

People saw "how the prime minister authorised directly buying MLAs in Karnataka from our party and from the JD(S)", he said, adding Modi's talks of fighting corruption are a "blatant lie".

"He is corruption. He is doing everything to subvert this nation and he is doing it across the board. There are phone conversations of MLAs being approached for purchase by the BJP and that was directly authorised from Delhi," he said.

He alleged that RSS, the BJP's ideological patron, wants to capture every institution "and that is what we are fighting" and will "work with the opposition to defeat the BJP".

He hoped that the BJP and RSS will learn a lesson from the developments in Karnataka where Governor Vajubhai Vala had invited the BJP to form government, "that the institutions of this country, the will of the people of this country cannot be disrespected".

The Congress had moved the Supreme Court following the governor inviting Yeddyurappa to form government and giving him 15 days to prove majority. The apex court had slashed the time for trust vote and fixed it for Saturday.

Accusing Modi, Amit Shah and RSS of believing "that every institution can be destroyed", he said:

"You can disrespect anybody in this country simply because you happen to be in power? And the BJP and the RSS does it again and again. That there is no institution in this country that is worthy of the respect of the prime minister, Amit Shah and the RSS."

He also accused the BJP of disrespecting the proceedings of the Karnataka Assembly, saying the national anthem was not played after Yeddyurappa announced his resignation and the BJP legislators and the Pro-tem Speaker left the house. "In a way, this is what we are fighting today... The idea that you can rubbish every single institution in this country."

Asked if the state Governor should resign, Gandhi said the power was completely controlled by the Prime Minister and the RSS. "So, it is a good idea to resign, but I can guarantee you that, under the BJP regime, the next man will do exactly the same thing," he said.