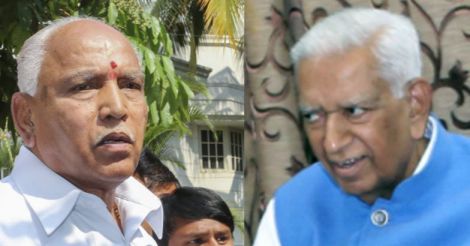 In Karnataka which threw up a hung verdict on Tuesday, governor Vajubhai Rudabhai Vala has given 15 days' time to BJP's Yeddyurppa to prove majority in the House.

New Delhi: Though the president and the governor have discretionary powers to decide on the number of days given to a government to win the trust vote, going by similar cases, the government is bound to prove its majority on the floor of the House at the earliest.

In the last such case in Goa, the Supreme Court gave only four days for the government. However, at the Centre, presidents have given even a month's time. There are records of governments getting 15 days, 7 days and even just two days to win the confidence vote.

But of late, the trend is that the incumbent governments are told to prove their majority as soon as possible. After the Lok Sabha elections in 1996, the BJP had emerged as the single-largest party. Then president Shankar Dayal Sharma invited Atal Bihari Vajpayee to form the government and gave him 15 days to prove the government's majority.

Vajpayee took oath on May 16 and had time till May 31 but decided to not wait for the trust vote since he couldn't manage the necessary numbers and quit.

The unpardonable absence of Rahul in K'taka

No stay on Yeddy swearing-in as Karnataka CM

In 1998, it was Vajpayee again, who was given 10 days' time by the then president, K R Narayanan. Charan Singh had a generous one month's time, but he too decided to quit before facing the floor test. Both V P Singh P V Narasimha Rao had got a month's time each. But, I K Gujral got only two days -- after his swearing-in on April 21, Gujral had to prove his majority by April 23.

In last year's assembly polls in Goa, the Congress had emerged as the single-largest party. However, the BJP won over other smaller parties and approached governor Mridula Sinha to form the government, following which Manohar Parrikar was sworn in the chief minister.

Caught off-guard, the Congress moved the Supreme Court against this. Parrikar was sworn-in on March 12. He was asked by justice Jagdish Singh Khehar, justice Ranjan Gogoi and justice R K Agarwal to prove his majority by March 16.

When there were similar situations in Uttarakhand, Arunachal Pradesh and several other states, the Supreme Court had sought immediate trust vote.

However, in Karnataka which threw up a hung verdict on Tuesday, governor Vajubhai Rudabhai Vala has given 15 days' time to BJP's Yeddyurppa to prove majority in the House. Yeddyurppa was sworn in the chief minister on Thursday.