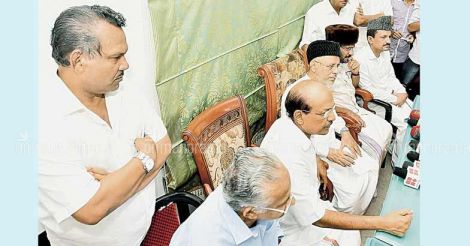 The party leadership relied on a mini SWOT (strength, weakness, opportunities, threats) analysis because it did not want to antagonize either camp.

Malappuram: The Muslim League claims it will be a cakewalk to win back the Vengara assembly constituency vacated by its strongman P.K. Kunhalikkutty yet the party had a difficult time choosing his successor.

The Muslim League even went for a corporate style SWOT analysis before the leaders zeroed in on K.N.A. Khader.

The confusion started when senior leader K.P.A. Majeed opted out of the fray at the last moment. Khader was a natural alternative but a section of influential leaders argued in favor of U.A. Latheef.

Khader did not want to be let down. He proceeded to the first family of the party at Panakkad. He held talks with Hyder Ali Shihab Thangal and Sadique Ali Thangal to keep alive his candidature ahead of an official meeting of the party’s leadership.

When Latheef was summoned to Panakkad urgently from Manjeri, rumor mills started working. He thought he was being anointed as the party’s candidate in Vengara but he was entrusted with a new post in the party, that of the district general secretary.

There were a number of factors that tilted the scale in favor of Khader. The party leadership relied on a mini SWOT (strength, weakness, opportunities, threats) analysis because it did not want to antagonize either camp. When both candidates performed well in the test, the core group assigned them marks.

Khader had the upper hand because of his oratory, parliamentary experience and his role in coordinating the campaign for the Malappuram Lok Sabha election in which Kunhalikkutty trumped the LDF.