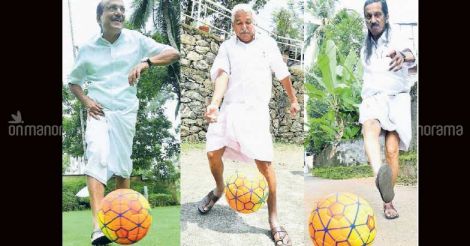 Political leaders of all hues camping the district to campaign for the Vengara assembly by-election took to the field with Manorama to celebrate football.

Malappuram: When India is gripped by football mania, can Malappuram be far behind? The mecca of Kerala football gave election campaign a break to kick off celebrations in the run up to the FIFA Under-17 world cup.

Political leaders of all hues camping the district to campaign for the Vengara assembly by-election took to the field with Manorama to celebrate football. Former chief minister Oommen Chandy and ally P.K. Kunhalikutty MP insisted that the by-election was a one-sided game but CPI leader Pannyan Raveendran was confident of the swelling ground support.

The Muslim League leader was at his best as soon as he hit the ground. The Member of Parliament, whose election to the Lok Sabha necessitated the by-election in Vengara, was the schoolboy from the local school when he shot the ball on target. Everyone applauded but the photographer, whose lens hood lay shattered.

“The moment we came back from school, we would start chasing the ball,” Kunhalikutty reminisced. “I was injured many times. Once I ignored an injury in my hand while playing, only to be hospitalized with a major fracture.”

His favorite team is always Brazil. He never misses a World Cup match. When it comes to the European leagues, English Premier League is a clear winner.

What about the match in Vengara? “We have a one-sided match here. Has anyone any doubts about the score? The United Democratic Front will shatter its opponents.” he said.

Chandy has no substitute

Oommen Chandy braved the sun and folded the mundu above his knees before taking a shot. “I am not very good at it,” the veteran Congress leader admitted.

“I used to play ball badminton when I was a student of the S.B. College at Changanassery. In Puthuppalli, we have ‘nadan panthukali’, played with a small leather ball. I used to watch a lot of football matches when I was a law student. Even now I skim through the sports pages despite my tight schedules,” Chandy said.

The former chief minister is indispensable in Vengara. He is campaigning with the same commitment with which he worked for Kunhalikutty in the recent Lok Sabha by-election in Malappuram. He is busy attending public meetings and family get-togethers. “The UDF will score the winning goal. No doubt about it,” he said.

The CPI leader dominated the ball with amassing footwork. “The Left Democratic Front will dribble through to the front at Vengara this time,” he said.

The communist who has authored a couple of books on world football had a load of memories to share on his connections with the game. He reminisced his stint as the manager of the Lucky Star Club in Kannur, an equally football-crazy district. He had even played for the famed club.

“The Under-17 World Cup is a harvest of young stars. We are waiting to see the future stars in action. I don’t want to speculate about the winners before the tournament starts. Let us see.” He, however, was sure that the ruling alliance had an advantage in Vengara from the government’s welfare policies.