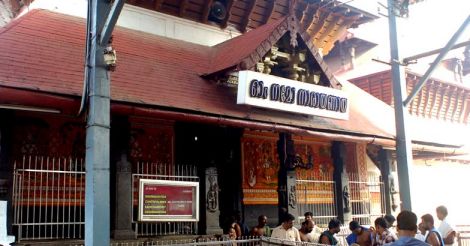 The chief priest at Guruvayoor temple has come out in public supporting entry for all into the temple, irrespective of religion: File photo

Thiruvananthapuram: Right-wing rhetoric seems to tone down to good sense in the politically charged Kerala.

The latest is a Sangh outfit saying that it favored the appointment of all "qualified" persons irrespective of caste as priests in all temples, including the famed Lord Ayyappa temple.

The Hindu Aikya Vedi, a state-based right-wing outfit, said anybody knowledgeable with regard to 'pooja' and 'tantra' as prescribed by the tradition, is eligible to enter the sanctum sanctorum of shrines and perform rituals.

Aikya Vedi state general secretary E. S. Biju said the outfit is of the view that a person, who acquires knowledge in pooja and tantra, becomes a 'Brahmin' through his deeds, though he is not so by his birth.

"There is no need to consider caste pedigree as a base to appoint priests in shrines.. The non-brahmins, who have prescribed qualifications, are eligible to enter the portals of sanctum sanctorum and perform pooja in any temple, including the famed Sabarimala and Guruvayur shrines," he told PTI.

"We are also of the view that anybody who has true faith in the Hindu religion and customs, and those ready to follow the prescribed ritualistic and other traditions of the respective shrines can enter any temple to offer worship," he said.

His remarks come days after a non-Brahmin priest came out against the Travancore Devaswom Board (TDB) alleging that he had been denied the chance to become the priest of Sabarimala Temple as only Brahmins could apply for the post.

After the recent appointment of 36 non-Brahmins including six Dalits in various temples under TDB, the southern state is now witnessing a debate over a statement of the 'tantri' (head priest) of Guruvayoor Temple in Thrissur favouring the entry of non-Hindus in the shrine.

Quoting the historic Paliyam Proclamation made in the late 1980s, Biju said, "We are opposing even the term non-Brahmin... Because, when a person acquires knowledge in pooja and tantra, he is naturally elevated to the status of the so-called Brahmin through his karma (deed)".

He said the Proclamation, made during a meeting attended by famed 'vaidika sreshtar' (Hindu scholars and priests) of that time, had called for accommodation of all as priests on the basis of their karma (deed) and not varna (caste).

A similar meeting held in Guruvayoor in 1961 had urged the authorities to allow persons who have adequate qualifications in performing pooja to work as priests.

"But the governments and temple boards did not initiate any steps to implement the scholars' request.. Many decades have passed after that," the right-wing leader said.

When asked about the Guruvayoor head priest favoring non-Hindus' entry in the shrine, Biju said the Aikya Vedi completely backs the entry of anybody, including those belonging to other religions, provided they have faith in Hinduism.

"They should have complete faith in Hindu religion and obey the customs of the temple... If such a decision comes, it will help hardcore devotees like legendary singer Yesudas to enter the shrine and offer worship, which is his long-pending demand," he said.

Legendary singer K J Yesudas, a Christian by birth, has been denied entry to the famed shrine for being a non-Hindu.

The right-wing leader also alleged that the CPM-led LDF government in Kerala was trying to "interfere" in temple administration and take over the control from the traditional custodians, especially in the Malabar (north Kerala) region.

Read more at: Latest in Kerala | Kerala to tie up with UK varsity to revamp healthcare