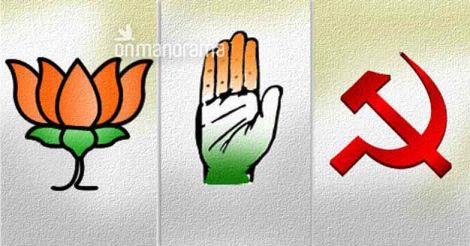 Chengannur: BS Yeddyurappa's humiliating exit as Karnataka chief minister may have a bearing on the campaign for the assembly bypoll in Chengannur. All three fronts in contest – the ruling LDF, opposition UDF and the BJP-led NDA – are forced to discuss the issue as the campaign heads to its final phase ahead of the May 28 vote.

It was the Congress-led UDF which was most excited as television screens screamed that Yeddyurappa announced his resignation after a live speech in the state assembly ahead of a floor test. Even as the UDF as well as the LDF played on the development, the NDA responded when queries came up about it.

While UDF leaders highlight the fact that BJP's anti-democracy manoeuvers have been defeated emphatically, they do not hesitate to remind the LDF that it has been proven beyond doubt that the Congress alone has the power to beat the BJP. They also stress that the LDF has no moral right to be excited about the developments in Karnataka and that too when the latter is lending undue importance to the BJP, which is way behind in Chengannur.

The LDF leadership, meanwhile, knows the BJP suffered a terrible loss in the neighbouring state and the result would impact Chengannur. They also find it convenient that there is now no necessity to highlight BJP's mischiefs as it stands totally exposed after its vain bid to buy out rival MLAs in Karnataka.

The BJP, however, feels that Karnataka will not impact the Chengannur bypoll. Their leaders claim that the Congress has entered into an unholy alliance in Karnataka. They also assert that people will identify an 'LDF-UDF unholy alliance.'

NDA leaders insist they will point out to people that Yeddyurappa showed political morality in quitting and that the BJP's power has only been boosted by the act.