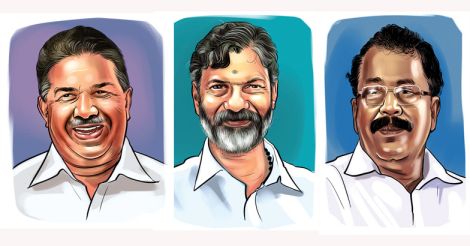 The CPM, Congress and BJP -- who are in a tough triangular fight in Chengannur -- claim to have visited as many households as possible in a bid to interact with all possible voters.

Chengannur: Pollsters and political analysts may argue that these are the times for innovative electioneering that has to cash in on the scopes of new media and cyber space. However, all major political parties, who aim nothing short of a victory in the Chengannur assembly bypoll, are not ready to buy that argument blindly. They know the power of the traditional door-to-door campaign that can help them not only fetch all possible votes but also understand the pulse of the constituency.

The CPM, Congress and BJP -- who are in a tough triangular fight in Chengannur -- claim to have visited as many households as possible in a bid to interact with all possible voters.

The BJP, which fights the poll pinning hopes on its impressive performance in the 2016 assembly polls, claims to have visited over 60,000 houses in the constituency in a campaigning that lasted over two months.

"We gave more emphasis on door-to-door campaign than public meetings since it is more effective. Our candidate P S Sreedharan Pillai spent most of the time for door-to-door campaign. He started attending vehicle rally only in the last stretch of the campaign," a BJP leader associated with the party's campaigning told Onmanorama.

Top BJP leaders, including party state unit president Kummanam Rajasekharan, have been attending household meetings and taking part in door-to-door campaign for weeks. Though sources in the BJP claim to have received no specific instruction from the national leadership regarding campaign strategies, the party's emphasis on door-to-door campaign is perceived to be in line with the saffron party's all-India strategy. In every state that went to polls under the leadership of national president Amit Shah and prime minister Narendra Modi, the party had relied on direct contact with voters that starts much befor the elections. As per latest reports, the party has already started a door-to-door campaign in every booth in Telangana, the state due to go to polls along with the next general elections.

The CPM, meanwhile, claims that its candidate Saji Cherian has already contacted 90 per cent of the voters in the constituency. "Door-to-door campaign is not something new for the CPM. We have always conducted it properly. This time our candidate has contacted so many voters over phone also," a CPM leader said.

He said Cherian has already completed two rounds of visits in all booths in the contituency.

Cherian is also spending time on personal visits and interactions in the last leg of the campaign.

UDF candidate D Vijayakumar, whom the Congress projects as a popular face in the constituency, said he has visited as many houses as possible. The party has deployed almost all of its legislators, cutting across generations, to keep the campaign front alive. Angamaly MLA Roji M John told Onmanorama that door-to-door campaign was highly effective. Thrithala MLA V T Balram was leading the door-to-door campaign near Puliyoor on Wednesday. The party has also fielded student activists from various parts of the state to energise the campaign.

Apart from door-to-door campaigns, the three parties have been using cyber space for a hectic campaign. Flash mobs and street plays have been the popular items on the campaign trail this time.