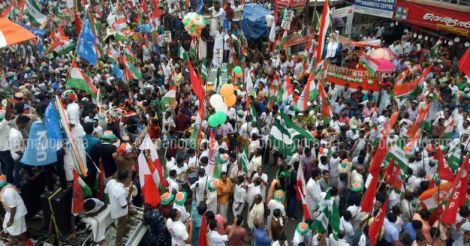 Chengannur: High-frequency campaigning for the May 28 bypoll in the Chengannur Assembly constituency came to a close on Saturday as thousands of followers of mainstream political parties thronged the streets, waving flags, dancing and shouting slogans. It was literally a dance of democracy in this modest town as supporters of the CPM, Congress, BJP and even Aam Aadmi Party and their allies flooded the roads for two hours from 4 pm.

The culmination of the open campaign underscored the claim that a tough three-cornered fight was on in the constituency at least in terms of electioneering. Cadres of the CPM, Congress and the BJP put up a perfect show of strength even as the celebrations and the last-minute frantic bid to reiterate their poll planks went off almost peacefully.

Earlier in the day, senior party leaders attended several programmes and press meets in the constituency in a last-minute attempt to canvass as many votes as possible and to attack the rivals on all possible fronts. CPM state secretary Kodiyeri Balakrishnan, Congress leader Ramesh Chennithala and BJP's P K Krishna Das were among the top leaders who led the campaigning on Saturday. BJP's star campaigner actor and Rajya Sabha MP Suresh Gopi took part in the party's road show.

The surprise appointment of BJP state president Kummanam Rajasekharan was the centre of the political discourse in the constituency on Saturday. While the CPM and the Congress made it an issue to attack the BJP, the saffron party, after an initial hiccup as to how to react to the unexpected turn of event, put up a brave face and highlighted Kummanam's elevation as an honour for him and the state.

Kodiyeri said that the governor post that went to Kummanam was actually offered to Sreedharan Pillai, an allegation rubbished by the BJP. Chennithala said the BJP has changed the captain of the ship at the last minute fearing defeat. Kummanam was absent in the constituency on Saturday as he could not take part in campaigning as governor-designate. Sunday will see silent campaigning by all the top leaders who will wield all their powers and influence to gather each possible vote in the constituency where caste and community equations along with political reference will decide the winner.