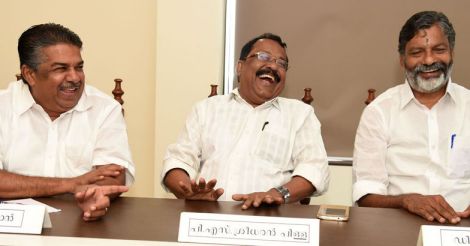 The Chengannur assembly constituency is just 660 short of 2 lakh voters. The byelection campaign boards put up by candidates across the constituency perhaps outnumber the voters. With K M Mani’s party entering the fray, the billboards may touch a record.

The typical central Travancore constituency is witnessing a close fight. Candidates of the ruling Left Democratic Front, the opposition United Democratic Front and the BJP try hard to project a picture of confidence. Everyone interprets the undercurrents to their liking.

CPM’s Saji Cherian said the LDF has left no stone unturned. “If I do not win this time, an LDF candidate may not win from Chengannur from now on. That is the level of work we had done here. No doubt about it.”

Congress’s D Vijayakumar claimed he was a local favourite. “Nobody knows me like the people of Chengannur do. The CPM’s efforts to paint me as an RSS man would only backfire.”

The confidence is quite natural in the run up to the election. Working with the good-natured voters of Chengannur can be deceptive. They never disappoint a candidate.

Chengannur defies all forecasts. The scene has changed since LDF’s K K Ramachandran Nair won the seat in 2016. He won Chengannur by 7,983 votes in an election generally favourable to the LDF across the state.

Sreedharan Pillai came close to being the runner-up as the BJP rode the Modi wave. This time the cards have been reshuffled yet all formations have their own trump card.

The LDF is guaranteed of about 52,000 votes in Chengannur, judging by the vote share in 2011 when the front lost the seat and in 2016 when the front won. The CPM-led front also expects to benefit from a rebound of Ezhava votes that had gone to the BJP through the Bharat Dharma Jana Sena last time. The front could also receive more votes from the minority sections.

LDF’s poll managers are confident of winning the seat even without the support of Mani’s party.

Saji Cherian could be seen as a better representative of Chengannur for he could lobby for the seat in the next three years of LDF rule.

The LDF workers are working overtime to compensate for any shift in votes from the BJP to main rival Congress. If the LDF won 52,880 votes last time, the leaders have set a target of at least 10,000 additional votes this time.

“We are working to increase our votes and the margin of victory,” CPM state secretary Kodiyeri Balakrishnan said.

UDF leaders expect Vijayakumar to win back at least 10,000 votes to make up for the shortfall. The Congress and its allies also pin their hope on the support of the influential NSS. The SNDP’s skirmishes with the BJP may also benefit the Congress.

The Congress had kept its minority support base intact even when it lost out to the CPM in 2016. The party hopes to be in the good books of the Christian and Muslim sections after the Karnataka experience.

The Congress leaders expect Vijayakumar to garner sympathy votes since he had always been cold-shouldered ahead of the polls. The UDF sees Mani’s support as an indicator of a sure victory.

“The people are just waiting for a chance to vent their anguish against the central and state governments,” opposition leader Ramesh Chennithala said.

The BJP-led NDA alliance has been working systematically at the grass roots, instead of drumming up emotions. Both the LDF and the UDF expect the BJP to lose votes this time but the hopes may be unfounded since the RSS has ensured that the BJP votes stay intact.

The BJP’s rise from 2011 to 2016 was pronounced in Chengannur, where it lost the runner-up position by just 2,215 votes. The BJP has never had such brighter chances.

The BJP admits that the inimical position of the BDJS may affect its prospects. The party managers are confident of a patch-up ahead of the byelection though.

Voters in Chengannur are educated and insulated from the usual caste and religious matrix. Over to them.