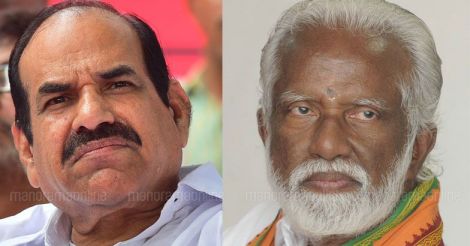 Chengannur: The ruling CPM in Kerala is in a bid to project the central government's move to appoint BJP state president Kummanam Rajasekharan as the Mizoram governor as a reflection of the infighting within the ranks of the saffron party.

The CPM said that the governor post had been actually promised to party candidate in Chengannur, P S Sreedharan Pillai, but it has now been given to Kummanam, who was hand-picked by the BJP top brass ahead of the 2016 assembly polls in Kerala.

"Kummanam has taken away what was promised to Sreedharan Pillai. These are all pat of the factionalism prevailing in the BJP's Kerala unit," CPM state secretary Kodiyeri Balakrishnan told an election rally in Chengannur on Saturday.

President Ram Nath Kovind on Friday issued an order appointing Kummanam as the governor of Mizoram in a surprise move, which has left the BJP camp in Kerala baffled. Sources in the party said that even the state leadership of BJP was kept in the dark until the order came out. The move is largely viewed as the party's decision to replace Kummanam with a more dynamic head for the party in Kerala, where it faces a tough battle from both the CPM and the Congress.

The BJP was trying to downplay such implications and project the appointment as an honour to Kummanam and the state unit of the BJP. Asked about the impact of the move on Chengannur bypoll, Sreedharan Pillai said, "... the Centre gifted Kerala MPs, union minister and now a governor. However, I doubt if the state was thankful to the Centre."

Why was Kummanam made Mizoram governor

BJP's star campaigner and Rajya Sabha MP, Suresh Gopi, said that the governor's post was a due honour for Kummanam.

Notably, the BJP cadre in Chengannur is apparently not happy with the move. "We are not in a position to explain the implications of the move. He (Kummanam) was in the forefront of our campaign throughout. Now, we find it difficult to explain to the people why he was shifted from the charge all of a sudden," a local BJP leader, who is in charge of campaign in a panchayat, told Onmanorama.

Ever since reports of Kummanam's appointment came out, both the CPM and the Congress have been trying to take advantage of it saying, the BJP has realised that Kummanam's leadership has not been effective in Kerala and that they were going to lose in Chengannur.

Senior Congress leader and leader of the opposition Ramesh Chennithala on Saturday said the BJP shifted the captain at the last minute fearing defeat.

Saju Edakkallil, joint coordinator of BJP in Chengannur constituency, rubbished all such campaigns and said they were not going to affect the party's prospects in Chengannur.