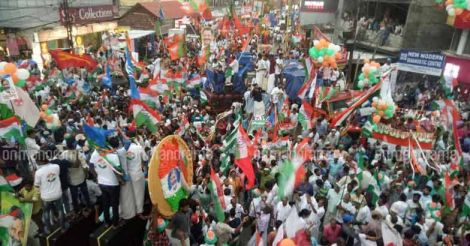 Chengannur: The voters of Chengannur have made up their mind for the byelection to be held on Monday and all the three major political parties in the race have their calculations ready.

The CPM-led LDF, Congress-led UDF and BJP-led NDA have all put up a face of confidence even at the last minute as their candidates spent the final day of campaigning meeting prominent people, attending prayer meets and family functions and visiting houses where deaths occured.

The CPM, fighting to retain the seat held by its K K Ramachandran Nair, expects to win the seat by a margin of 8,000-10,000 votes, a source in the party said. Nair won the 2016 Assembly polls by a margin of 7,983. The CPM hopes to improve its vote share this time. Asked about the factors favouring them , the CPM leader told Onmanorama that they were confident that the development projects initiated by Nair would help them. The party has been projecting its candidate Saji Cherian as one who is capable of taking off the constituency's development to new heights. The CPM, in its manifesto, claims that development projects worth Rs 750 crore were initiated during the short tenure of Nair. The bypoll was necessitated by the sudden demise of Nair.

The CPM exudes confidence that all communities would vote for it in a bid to stop BJP making gains. They also assess that the developments in Karnataka where the Congress had to make an alliance with the JD(S) and keep their legisltors confined to resorts to stop poaching bid by the BJP have damaged the grand old party's image in Chengannur. The CPM calculates that it would lead in all the 10 panchayats in the constituency. However, it is doubtful about coming on top in Chengannur municipality which is a fortress of the UDF. The municipality stood with the UDF even as the BJP came ahead in several other local bodies.

The UDF, for which a comeback in the assembly segment is a matter of political survival, pins its hopes on the possible consolidation of Hindu votes in favour of its candidate D Vijayakumar. Vijayakumar's association with the Akhila Bharatha Ayyappa Seva Sangham is believed

"This time we hope to win by a margin of 3,000-5,000 votes," a UDF leader in charge of the front's campaign told Onmanorama. The party hopes that a major portion of the Nair votes would poll in favour of Vijayakumar. The Nair community constitutes 24 per cent of the population of Chengannur constituency. The party had put up a strong campaigning as it is so desperate to wrest the seat. The UDF hopes that there will be a dip of at least 10,000 votes in BJP's share. The

front cites the non-cooperation of ally BDJS in BJP's campaign as the reason. UDF sources said the front would lead in seven panchayats. It had come ahead of the other fronts only in Pandanad panchayat and Chengannur municipality last time.

The BJP has forecast a winning margin bigger than the numbers predicted by the rival fronts. The party-led NDA hopes to emerge victorious by a margin of 10,000-12,000 votes. Sources in the BJP rubbished the rivals' claim that it would lose BDJS votes. "The SNDP union in Chengannur has offered us all support and we will get all the votes from the ezhava community that we got last time," the leader said. Claiming an upper hand in campaigning, the leader said the NDA would lead in seven panchayats, without naming them.

In 2016, the front had come ahead in Thiruvanvandoor panchayat and second in Puliyoor, Budhanoor, Cheriynadu and Venmani panchayats. The party claims that the people would vote for it since they have realized the "unholy nexus" between the Congress and the CPM at the national and regional levels. It also claims that the Modi wave is very much alive and will attract more votes to its kitty this time.

The NDA has fielded veteran BJP leader P S Sreedharan Pillai, who had showcased the stunning performance in 2016.