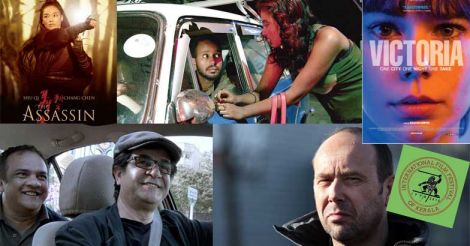 A cab driver and a beautiful young prostitute fall in love while struggling to survive on the mean streets of Addis Ababa, in this frank, gritty drama from Ethiopian writer-director Hermon Hailay.

French director Pierre Jolivet's 'The Night Watchman', the winner of the Golden Goblet award at the Shanghai International Film Festival, is about a man who works as a night watchman in a shopping mall in the slum outskirts of Paris.

The Assassin, set in 8th century China, is about Nie Yinniang, a female killer appointed to slay corrupt government officials by her master. The film is loosely adapted from the late 9th century martial arts story 'Nie Yinniang' by Pei Xing. It was an official selection in the main competition section at the Cannes Film Festival this year.

For his new film, Panahi, who was put under house arrest for almost six years, retreats to an even more confined location: a taxi that circles the streets of Tehran, with Panahi himself in the driver's seat. Without ever leaving the cab, Panahi shows life in today's Iran as he coaxes the fares he picks up to speak to him about their concerns, fears, hopes, and expectations.

The movie, shot in a single take without any cuts, is about woman who meets four Berliners outside a nightclub in Germnay and their adventure. The thriller won many international awards including Prize of the Guild of German at Berlin International Film Festival.