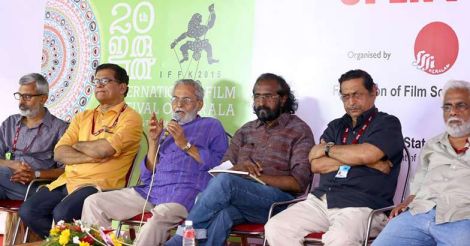 Few quality filmmakers find hard to get a theatres for screening; hence such films get confined to festivals, speakers said at an ‘Open Forum’

Few quality filmmakers find hard to get a theatres for screening; hence such films get confined to festivals, speakers said at an ‘Open Forum’ on the sidelines of IFFK here.

The speakers discussed the prospects of the film society movement in the state.

"The impact of film societies, though little, was deep," said renowned filmmaker K P Kumaran. "Now, the federation of societies should leave aside its narrow mindset and promote making socio-political moves."

George Mathew, office bearer attached to Federation of Film Societies of India said the state’s film societies contributed in four phases over the years. "They initially created awareness about the importance of cinema. Then came their contribution to film criticism. After that they contributed to the making of filmmakers—and then the IFFK," said George.

The session was moderated by film critic V.K. Jospeh.