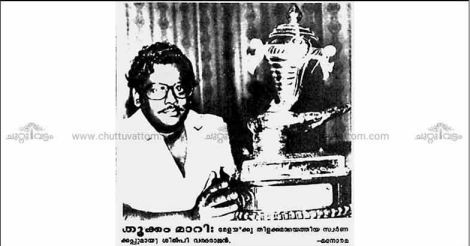 Vyloppilli insisted that if a gold trophy is given for excellence in sports, then the champions of the school festival should also be presented a trophy of no less than 101 sovereigns.

Thrissur: In 1985, both the Nehru cup football tournament and the Kerala School Kalolsavam were held in Kochi.

The main judge of the school festival, Vyloppilli Sreedhara Menon, found that the football tournament had more sheen, what with its cup and popularity.

Vyloppilli wondered why shouldn't the school festival get a cup and shine a la the football tourney and the idea for a 101-pavan (sovereign) gold cup was born.

Vyloppilli insisted that if a gold trophy is given for excellence in sports, then the champions of the school festival, which is a mega festival of art and culture, should also be presented a trophy of no less than 101 sovereigns.

The then education minister TM Jacob didn't brook any delay in announcing that a gold trophy will be presented for the school festival champions from next year.

Next kalolsavam was to be held in Thrissur. But, unfortunately, forget a 101-sovereign cup, not even a 10-sovereign trophy could be made.

All that was given to the winning school was a 6-pavan trophy. However, Jacob guaranteed that there would be a 100-pavan trophy next year. Several meetings and fundraisers followed.

Soon a competition was held to choose the person who will design the gold cup. Chirayinkeezhu Sreekandan Nair was chosen to design the trophy.

Before finalising the design, Sreekandan Nair met Vyloppilli and took his advice. Staying put in a tourist home in Thrissur, he designed the cup in just one day. Though the cup was to have 101 pavans, in the end it consumed 117.5 sovereigns of gold.

The trophy base was built using rose wood. A book is placed on the base and above it is a hand wearing bangles and holding a right-spiralling conch, conveying the message of spreading knowledge.

In 1987, the new cup was presented to overall champions Thiruvananthapuram at the festival held in Kozhikode.

It was the dream of Vyloppilli which was fulfilled by Jacobs determination.