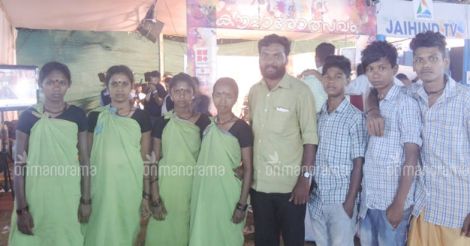 Thrissur: The journey of these seven kids from a tribal hamlet in Wayanad to the State School Kalolsavam is something Kerala as a society can be proud of. The group of seven students of Rajiv Gandhi Model Residential School at Noolpuzha near Sultan Bathery not only scored a proud 'A' grade in folk song competition, but also left a mark of their unique culture on the 58th edition of the Kalolsavam here on Saturday.

They sang a compilation of some traditional songs that are usually sung by the Kattunaika community, a primitive tribe in Kerala, as part of a unique dance form called 'Thottiyatta' during their weddings. The songs are in Kattunaika language which has more resemblance to Kannada than Malayalam. The students performed wearing their traditional outfits, which grabbed many eyeballs on the festival campus.

“Our team has been winning second place in the Wayanad revenue district Kalolsavam for the past five years. But this time, we could make it to the state fest and win 'A' grade here,” an elated, yet calm Prajod told Onmanorama on the sidelines of the Kalolsavam. Prajod, who works as a ‘committed social worker’, runs Thudithhalam, a group of tribal artists.

The students found their way to the achievement braving many odds, with acute poverty topping the list. “Many of them manage to get three meals a day just because they stay in hostels,” Prajod said.

He also revealed that Rahul, one of the team members, had lost his mother to an illness just three days ago.

“We still don’t know how to console him, but he manged to come with us,” Prajod said. A close relative of another team member was trampled by a wild elephant, a couple of months ago.

Asked if the students were willing to come out of their community and participate in events such as Kalolsavam, Prajod said the life in the residential school has helped them overcome such inhibitions.

The songs that won them the laurel were passed on to them by Machiyamma, an old woman at a hamlet in Muthanga. No doubt, the win means a tribute to Machiyamma and many such living repositories of tribal orature.