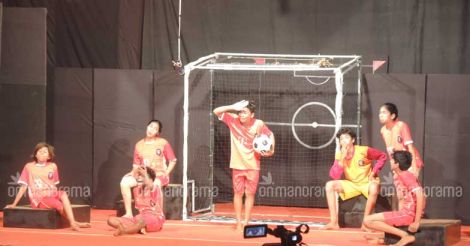 The play titled ‘Maradona’, staged by the students of Government High School, Vattenad, Palakkad, was highly appreciated for its substance and style. Photo: G Ragesh

Thrissur: The call for women empowerment has been a theme that recurred in several plays that have been staged at the State School Youth Festival over the years. However, a group of students from Palakkad has gone a step ahead with the theme of gender sensitivity by braving to discuss the issues of transgender kids on stage.

The play titled ‘Maradona’, staged by the students of Government High School, Vattenad, Palakkad, was highly appreciated for its substance and style.

The play was directed by Arun Lal, who has won the Kerala Sangeetha Nataka Academy’s award for best director in 2015 in the amateur theater section.

Maradona is an independent adaptation of a short story by P V Shajikumar with the same title. However, the theme of transgender woes was incorporated into it by Arun Lal, who hails from Peringode.

The play revolves around a group of schoolkids and their passion for football. In some brilliant moments of theatrics, the director and the actors transformed the stage into a football ground, mesmerizing the audience.

Asked about selecting the unusual theme for a children’s play, Arun said he wanted the kids to understand the issues better. “Initially, the children who participated in the play were not aware of the issues faced by transgenders. They were subscribed to the popular notions about transgender which spurn the sexual minorities. But during the process of production, their views also got changed. As they grow up, they would be able to look at transgenders from a viewpoint of gender equality,” he told Onmanorama.

The play was noted for its humor which triggered a laughter riot throughout the play. The children were a charged lot as performers. The audience received it with a standing ovation.

The play made it entry to the 58th State School Kalolsavam through appeal after it came second in the district festival. The fee for filing the appeal was donated by those who watched it in the district festival. Later, the fund for presenting it at the state fest was raised by performing the play on seven stages. The play has been booked for four more stages already.

Read: Latest Kalolsavam news | Too much drama on stage, less realism on the ground