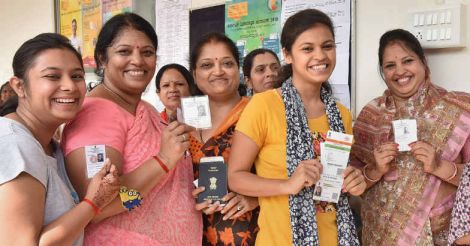 Voter turnout was expected to cross 70 per cent. PTI

Bengaluru: Karnataka chief electoral officer Sanjeev Kumar has said women and young voters exercised their franchise in large numbers in Saturday's poll and the turnout was expected to cross 70 per cent.

"It is heartening to tell you that women and young voters have come out in large numbers in this election and we are expecting voter turnout percentage to cross 70 per cent," he told reporters here.

He did not give further details saying, "We will come back to you once again with all details."

Kumar said a 55-year-old official on election duty died of a heart attack, while a 58-year-old woman tried to immolate herself by dousing herself with kerosene at Devagiri in Haveri district, but was saved by officials.

The CEO said adequate compensation would be given to the family of the official.

He did not reveal the reason for the woman trying to commit suicide.

Kumar said there were five minor clashes reported from various parts of Karnataka.

He also said re-polling would take place at Hebbal assembly constituency's Lottegollahalli polling station on May 14 due to failure of an EVM.

"The polling was stopped there due to EVM failure," he said'

Kumar a total of Rs 94 crore cash, liquor worth Rs 24.78 crore and various items like sarees, vehicles,dhotis, utensils and electronic gadgets worth Rs 66 crore were seized in the run up to the polls.

"This is more than eight times the seizures made in the last assembly election," he added.

Elections have already been postponed in Jayanagar and Rajarajeshwari Nagar constituencies in Bengaluru, he stated.

Polling in Jayanagar constituency was deferred following the death of BJP candidate B N Vijay Kumar on May 4, he said.

The Election Commission had Friday postponed polling in Rajrajeshwari Nagar seat to May 28, saying the current electoral process in the constituency has been 'vitiated' by parties and candidates by trying to influence voters.