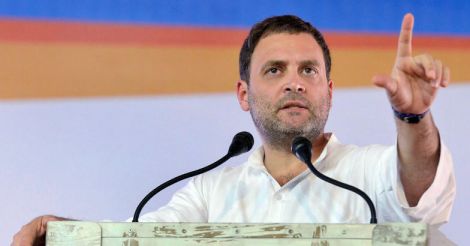 "Stopped legally, they will now try money and muscle, to steal the mandate," Gandhi said in a tweet. File/PTI

New Delhi: The Congress on Friday welcomed the Supreme Court's order of holding a floor test in Karnataka Assembly on Saturday, saying the Constitution has won and democracy restored.

Abhishek Manu Singhvi, who represented the Congress-JD (S) combine in the apex court, termed the Supreme Court's decision "historic", and said, "Interim chief minister B S Yeddyurappa has been restrained from taking policy decisions till tomorrow."

The BJP, which emerged as the single largest party with 104 seats in Karnataka Assembly, was invited by governor Vala to form the government despite the JD(S)-Congress combine staking claim by citing the support of 117 MLAs.

The majority mark is 112 seats.

In a historic pre-dawn hearing, the top court had on Thursday cleared the last-minute hurdle created by the Congress-JD(S) combine for the BJP's ambitious surge in southern India by paving the way for Yeddyurappa to be sworn in as the chief minister of Karnataka.

During the high-voltage hearing, which lasted from 2.11 am to 5.28 am, the top court had made it clear that the swearing-in and government formation would be subject to the final outcome of the case.

On Friday, a three-judge bench headed by justice A K Sikri said, "Let the House decide and the best course would be floor test." The apex court also directed the Karnataka government and the governor not to nominate any MLA from the Anglo-Indian community to participate in the floor test.