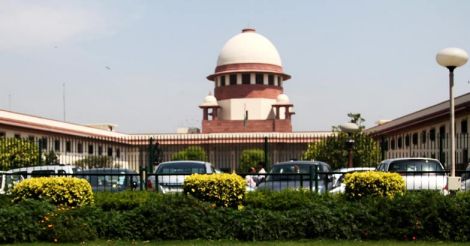 The three-judge Supreme Court bench could not find answers to several questions in the hearing that lasted over three hours between 2.10 am and 5.37 am.

New Delhi: In the second round of hearing of a petition filed by the Congress-JD(S) alliance challenging Karnataka governor Vajubhai Vala's decision to invite the BJP to form government in Karnataka, the Supreme Court on Friday ordered a floor test in the state Assembly on Saturday.

The first round of hearing was held in the wee hours of Thursday as the petitioners urged for an immediate hearing as they wanted to stop BJP's B S Yeddyurappa from taking oath as the chief minister of Karnataka.

How did former Gujarat finance minister and Karnataka Governor Vajubhai Vala conclude that 104 is greater than 1117? Why did the Governor generously give B S Yeddyurappa 15 days to prove majority when the latter asked for only seven days' time?

The three-judge Supreme Court bench could not find answers to these questions in the hearing that lasted over three hours between 2.10 am and 5.37 am.

Around 1 am, the apex court witnessed a mad rush of scribes following alerts from advocates privy to the development. The hearing began at the courtroom number six by the bench headed by Justice A K Sikri at 1.45 am.

Here is a timeline of the courtroom drama that unfolded on Wednesday night and early hours of Thursday in the Supreme Court over the Karnataka power tussle:
1.30 am

Senior advocate Abhishek Manu Singhvi and a battery of lawyers trooped into the court premises. As they waited for the courtroom number 6 to open, Singhvi noted that midnight hearing was not unprecedented, recollecting the instance of the Thapar case when he moved the Supreme Court with a bail application late in the night. Within a few minutes, the courtroom was opened.

Mediapersons jostled for space to be as close to the front and near the seats of the judges as possible. Amidst all the hustle and bustle, some of them were updating their respective newsrooms on the latest developments through WhatsApp messages. Singhvi took a seat on the right side of the front row opposite to the three judges. 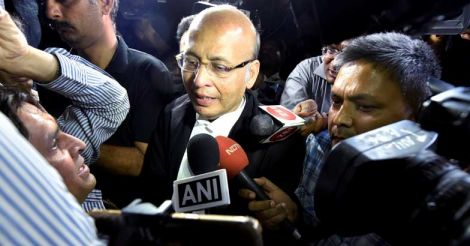 Senior advocate Abhishek Manu Singhvi and a battery of lawyers trooped into the court premises around 1.30 am.

Additional Solicitor General Tushar Mehta sat on the left side of the row. The wall clock at the courtroom showed 1.45 am, but the hearing was yet to start. It was then former attorney-general Mukul Rohatgi turned up. Both the sides were busy reading and discussing the copies of the earlier verdicts on similar cases.

The three-judge bench of Justice A K Sikri, Justice Ashok Bhushan and Justice S A Bobde arrived. Immediately, they called the petition filed by the Congress and the JD (S) challenging the Governor's decision for hearing. When Singhvi began his argument, Rohatgi opposed him, saying that the Governor’s order could not be questioned in a court as per Article 361 of the constitution.

However, Justice Sikri nodded at Singhvi to proceed. When Singhvi argued that though both the fronts had submitted a letter to the government earlier ‘today’, the Governor invited BJP to form government, the court interrupted and corrected him saying that it happened ‘yesterday’.

Singhvi also presented a detailed account of the election results and the political drama unfolded in the state capital and the Raj Bhavan following the announcement of results. He explained the constitutional convention in the case of a fractured mandate outlined by the Sarkaria Commission and read out the key portions of the five-judge bench’s verdict in the Rameshwar Prasad case on January 25, 2002. He requested the bench to bring clarity on the rule to be applied in a situation where no single party obtained absolute majority. To this demand, the bench asked him to define the term ‘rule’.

Singhvi’s answer: “In the case of a hung legislature, the first preference should be given to the numerically stronger pre-election collation. If they do not have the majority, the Governor should invite the post-election alliance to prove its majority in the House. The single largest party should be invited only if the post-election alliance too does not command majority. The Congress-JD (S) post-alliance has the support of 117 legislators and we have submitted letters with signature of all of them. But the Governor chose to invite the single largest party with only 104 members. Of course, the Governor can exercise discretionary power to invite any of the two, but that jurisdiction cannot be exercised at will. It will be obvious if the court examines the principles laid down by the SC in the Bommai case.

The Governor did not invite the petitioners to form the government. By doing so, he failed to follow core democratic principles. Moreover, the BJP was given 15 days’ time to prove majority. While delivering judgment in the Rameshwar Prasad case, the SC had observed that giving such a long period of time would lead to horse-trading and defection.

It requires only basic awareness to understand why the Governor gave preference to a party with 104 legislators over an alliance with 117 members. Even Yeddyurappa did not claim in his letter that he enjoyed support of more than 104 MLAs.

To this, the Bench interrupted and asked him to produce a copy of that letter.

“I don’t have it with me. However, it is a fact that the letter submitted by the Congress-JS (S) combine claimed that they enjoy the backing of 117 members. Yet, the Governor invited the single largest party with 104 MLAs. It means open invitation to defection.”
The bench then made it clear that horse-trading or defection will not be allowed.

Singhvi continued his argument, giving detailed descriptions of recent instances where governors invited single-largest parties or post-election alliances to the form government in different states. The court noted that it was impossible to proceed with the hearing without going through the letter submitted by Yeddyurappa to the Governor.

Singhvi handed over a copy of the Governor’s letter to Yeddyurappa to the Bench. Holding that copy aloft, Justice Bobde stated it lacked clarity and was unreadable. Immediately, a better copy of the letter was submitted.

Counsel for the defendant K K Vengugopal began with the answer to the question why the BJP was given an extended period of 15 days to prove majority. According to him, the Governor’s decision to give fifteen days to Yeddyurappa cannot be looked at with a legal eye. Without touching upon the dispute on majority, he continued his argument. “I’m here representing the central government. We don’t have any clue about the discussions between the Governor and the BJP leader. We are arguing over speculations and hearsays. What if the BJP leader had managed to convince the government that his party was having the majority while staking his claim to form the government?

Rohatgi interfered and responded to that argument. “That is why I maintain that this petition should not have even been considered for hearing, that too late in the night. It is a total waste of time.

When Venugopal questioned the genuineness of the signatures in the letter submitted by the Congress-JD (S) alliance, the Bench observed that the BJP does not have support of any other party whereas the Congress-led alliance enjoys the backing of JDS (S) MLAs and some of the independent members. In such a scenario, on what ground the authenticity of the letter could be questioned, the court queried.

To this Venugopal replied: “The Governor could have asked the alliance to produce all the MLAs. We don’t know what really had happened. Let the swearing-in ceremony take place. Can’t it be nullified in the future?

The Bench: That’s a valid point. The court can re-examine it. We are not evaluating the Governor as an individual, but his duties are being reviewed.

Venugopal: Let them take floor test to prove majority. They may lose the test, but what if they pass it? I think the Governor has only exercised his discretionary power.

The Bench: If the situation is vague and ambiguous, what you claim can be agreed. But it is not the case.

As the hearing continued making little headway, some of the attendees fell asleep. It was Rohatgi who brought them out of slumber. Seemingly running out his patience, he raised his voice: “I request the Bench to dismiss this petition. I don’t know what exactly they want. Do they want the court to pass an injunction on the Governor’s order? How can the court quash the order of the Constitutional head of the state? How can they stoop that low to undermine the spirit of the constitution? Who has authority to dictate terms to the Governor? What if his actions are proved right?

The Bench: Do you intend to say the court should not have intervened in the issue?
Rohatgi: I feel so. Stopping the Governor from exercising the constitutional powers wrested with him is such an act. Can the President be stopped from issuing warrants of appointment? The Governor is not personally liable, but his exercise of gubernatorial duties is judicially reviewable. The protection given by Clause (1) of Article 361 covers the exercise and performance of the powers and duties conferred on the Governor. So the central government is obliged to endorse his actions.
The Bench: The Governor has already taken a decision. The court can definitely scrutinise it, because he does not have absolute power.

Rohatgi: I’m not arguing that the Governor’s action could not be rectified. Courts across the country make such decisions on a daily basis. But the Governor cannot be obstructed from discharging his duties.

Singhvi: What is his (Rohatgi’s) point? It is not clear whom he is representing. In a channel discussion, I heard somebody saying that he would be appearing on behalf of two MLAs. Who are they? Is there somebody representing Yeddyurappa?

Rohatgi: I will appear for whoever I want to. You can’t decide that.

Justice Sikri: I’m allergic to these kinds of arguments. In fact, three of us are averse to such spats. Sikri’s intervention calmed down the situation. But when the Bench maintained that there was no gain in postponing the swearing-in ceremony, Singhvi stepped in. “It will require statistical acrobatics to prove that 104 is larger than 117. We all know how that could be achieved.

The Bench asked Venugopal and Rohatgi why did the Governor give 15 days to Yeddyurappa to prove majority. But both of them failed to provide a clear and convincing answer.

Singhvi once again rose from his seat to respond to the counter-arguments. “The Governor’s actions can be challenged in the court and the court can correct it. I’m not seeking action against the Governor, but the operation of his order inviting Yeddyurappa to swear in can be stayed.

The Bench: The court doesn’t want to stop the ceremony.

Singhvi: Call it a stay order or an order instructing stoppage, but take a decision by listening to your conscience so that the veil of darkness could be pulled out.

The judges then huddled together for 15 minutes and put their heads together to find a solution. They returned to their seats and demanded the submission of the letter given by Yeddyurappa to the Governor. Singhvi wanted the court to order issue of notice.

The court instructed both parties to produce the letter and informed that the hearing will resume at 10.30 am the next day.

Singhvi thanked that judges for holding a post-midnight hearing and rendered his apologies for the inconvenience caused. Disappointment was writ large on Rohatgi’s face as he left the courtroom muttering under his breath.