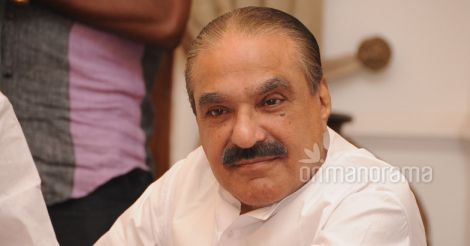 Mani had extended his support to IUML national general secretary P.K. Kunhalikutty when he contested from Malappuram in the Lok Sabha by-poll held on April 12.

Addressing a press meet at his hometown Pala, Mani said the KC(M)'s support to IUML candidate K.N.A. Khader should not be seen as a bid by his party to seek a re-entry into the UDF. IUML is a key partner in the UDF.

The KC(M) had quit the UDF in August last year after blaming a section of the Congress leadership for the rout in the assembly elections held in May, 2016.

Mani had extended his support to IUML national general secretary P.K. Kunhalikutty when he contested from Malappuram in the Lok Sabha by-poll held on April 12.

Mani said it was quite natural for his party to support the IUML candidate in the seat vacated by Kunhalikutty.

The IUML had sought the support of the KC(M) for its candidate Khader in the byelection scheduled on October 11.

It was necessitated following the resignation of sitting MLA Kunhalikutty on his election to the Lok Sabha from Malappuram in April.

The Lok Sabha by-poll had to be held after the death of former union minister E Ahmed.

The KC(M) has not aligned with any front after severing its ties with the UDF.