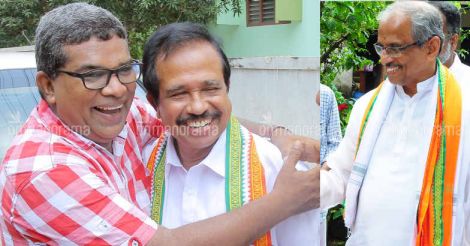 Malappuram: No prizes are up for grabs for guessing the out come of the Vengara by-poll, but the vote share of the Bharatiya Janata Party (BJP) and the Social Democratic Party of India (SDPI), is likely to come under some scrutiny due to an issue raised by both – 'love jihad'.

If the vote share of the SDPI rises, the moot question will be whose vote did it grab – the IUML or the CPM candidate?

The SDPI's Abdul Majeed Faisi had bagged 4.7 percent of the vote in 2016 by-poll, relegating the BJP to the fourth spot.

The ruling party at the Center just managed to garner 3.43 percent votes – to be precise its candidate Subrahmanian got a mere 3,417 votes out of the total 99,530 polled.

Kunhalikutty romped home with a margin of over 38,000 votes in 2016, only to increase this to more than 40,000 from Vengara segment in the Malappuram Lok Sabha by-poll, necessitated by the demise of E. Ahamed. SDPI's curious decision not to contest the Malappuram by-polls had been lampooned by political rivals then.

The BJP, rocked by a cash-for-medical affiliation scam, chose to deflect negative attention its state unit garnered through a Jana Raksha Yatra, which is on now.

But its high decibel pitch to the yatra by roping in even firebrand Uttar Pradesh chief minister Yogi Adityanath, who raised the bogey of 'love jihad' as a reality of Kerala, is likely to only alienate minorities further from the saffron camp.

It is also unlikely to polarize the Hindu community and hence, the BJP risks a further erosion in its vote share.

Amit Shah pulls out of BJP's padayatra via Pinarayi

It remains to be seen who would benefit from a probable erosion in BJP's already meager vote share, but the ruling Left Democratic Front (LDF) is clearly eying that as it sniffs a chance to reduce Kunhalikutty's huge victory margin to claim a moral victory.

That is evident from the immediate retorts to the Uttar Pradesh CM from CPM state secretary Kodiyeri Balakrishnan and politburo member Prakash Karat.

Kodiyeri even listed out names of senior BJP leaders, including union minister Mukhtar Abbas Naqvi, who married from outside the community. Kodiyeri has asked Yogi to clear the air by clarifying whether that would also amount to love jihad. It remains to be seen how this resonates with the electorate.

SDPI candidate K.C. Naseer is an advocate and is closely linked to the Hadiya case in which an inter-religious marriage annulment is now embroiled in a bitter court battle.

The SDPI says the the ruling and opposition fronts have failed to counter the Sangh Parivar campaign.

So if 'love Jihad' resonates with voters positively or negatively, who will reap its divisive fortunes? Only time will tell.

The SDPI, the political arm of the Popular Front of India, is also working overtime to quell widespread apprehensions that its sympathizers have connections with terror outfit, Islamic State.

Read more: Latest on Vengara election | Can Pannyan save Kunhalikutty's free kick? It's a different ball game in Vengara